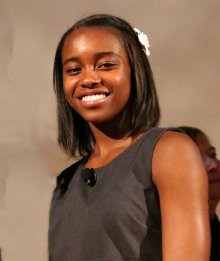 At just sixteen years old, Gloria Clark has dedication, confidence, and compassion well beyond her years. She excels in school, athletics, and writing. The honor roll student plays three sports—basketball, volleyball, and track—and has authored a book, Thru the Eyes of 9/11, a compilation of poems she wrote to draw attention to the fact that 9-11 still affects many people. The proceeds go to Project Common Bond, an international camp for young people who have lost a family member to an act of terrorism. “I felt that the money should go to them, so they could see that people still do care,” she explains.

All this is quite extraordinary for any high school student, but what makes it all the more exceptional is that Gloria is dyslexic, so her school work does take much longer than that of many of her peers. Yet, she’s not dropping any of her activities anytime soon, and she’s not afraid of working harder than most—in fact she seems to thrive on it.

Her extracurricular activities help her get through the stress of school. “I get really frustrated with school, and track is the way I let it out. It’s right after school, and during the day I get really stressed out, so I go to track to let it all out—and also in my writing.” This confident, happy teen wasn’t always so confident in school, and her other activities helped keep her going while she and her parents worked to help her overcome her dyslexia, even before they knew that that was the cause of her struggles in school.

Gloria’s mom, Jenell, describes their experience. “We always knew something was wrong, but the teachers said that she would outgrow her difficulties and that we should just ‘give it time.’ Gloria didn’t get diagnosed until the sixth grade, officially. She wore glasses for a year and a half, when she didn’t need them—she has 20/20 vision—but she wasn’t improving academically. It was really hard to see her struggling with this and not be able to help. To not know what was wrong.” The Clarks didn’t know what was wrong in those early years before the dyslexia diagnosis because no one used the word “dyslexia” to describe Gloria’s difficulties. Thankfully, the Clarks didn’t give up, and kept working to help their daughter overcome her struggles in school and find out what was holding her back.

“Once we got her help, this other side started to blossom and it was very encouraging to see her branch off into areas that she really loves—the writing and the poetry,” says Jenell.

A major turning point, and moment of pride for Gloria came when her mom “forced” her to write a poem about what it is like to be dyslexic (click here to read one of her poems) for the Atlanta screening of the HBO film The Big Picture: Rethinking Dyslexia. “I was ashamed and hating myself for being dyslexic at the time, but when I look back on it, if I had never gotten on that stage and told everyone about my struggles, I would never be where I am now,” Gloria observes.

A budding and talented poet, Gloria has been in a lot of poetry slams. She’s won money and trophies. In fact, she’s hoping that her writing will help her win a scholarship so she can pursue a writing career, with a major in journalism. “I like performing and I like acting, so I prefer poetry to other kinds of writing,” she says.

“On stage, nobody knows I’m dyslexic, and when I go back to the classroom, it’s different. Some people really don’t know what dyslexia is, so if I say I’m dyslexic, it sounds like I’m special ed. …I really don’t tell a lot of people. Even some of my teachers don’t know what it is…I have to explain it to them. I wish more teachers would be aware that some of their students are dyslexic, and to know what dyslexia is and how to help. You can’t teach everybody the same way. Everybody is different and everybody learns differently.”

Those who do know what dyslexia is, and all that Gloria is capable of achieving, have become a part of her tremendously inspiring support system. Her parents, Chris and Jenell, tirelessly advocate for her, explaining what dyslexia is to teachers and going over what Gloria needs to succeed in school. Gloria’s best friend is also a part of that team, helping her study. And there is one other essential team member. “Most of all, my little brother Colby, actually helps a lot, believe it or not.” says Gloria, “He’s two years younger than me, and he’s really smart and helps me with my homework and my spelling. We’re really close. I support him and he supports me. I’m his #1 fan and he’s mine.”

And for those who question Gloria’s ability to achieve anything she wants, you’re only fueling the fire inside her. “I just want to be really successful because people have had doubts in me, so I stress out about being successful.” That stress only makes her work harder—and that hard work, combined with her talent, and her stellar support team will most certainly ensure that Gloria proves those doubters wrong.

Ever the eloquent poet, Gloria offers this advice to those just learning that they are dyslexic: “Even though the road is dark now, if you keep walking, you will see the light very soon. You are special in your own way, and you can do anything. The sky is never the limit.”