Dr. Shaywitz’s book, Overcoming Dyslexia, has been a wonderful resource ever since my son was diagnosed with dyslexia, dysgraphia, and dyscalculia when he had just turned five years old. He was so severely impacted that the symptoms were evident early on. One SLP (speech and language pathologist) at the time was describing single-, vs. double-deficit dyslexia to me with my son’s scores in front of her. She said, somewhat tongue-in-cheek, “With his phonemic awareness and rapid naming scores in the 1st percentile, plus his working memory challenges and ADD issues, perhaps your son might be considered a quadruple-deficit dyslexic.”

My son is a typical homeschooler for our area. In my Yahoo groups (the now-defunct schwablearning.org site and HSDyslexicKids), he seems to be a typical, albeit profoundly impacted, dyslexic homeschooler. In other words, we struggle with the difficulties, but homeschooling gives us the opportunity to soar in areas of his strengths. And his self-esteem is intact!

To remediate his dyslexia, I have used private tutors (3-hour round trip commute 4x/wk, $900/month), Barton Reading and Spelling System (the scripted O-G—Orton-Gillingham—program with DVD instruction as well), and last year enrolled in the Neuhaus Education Center’s excellent O-G-based program. I have received 170 hours of coursework toward becoming an academic language therapist. I met several other homeschooling moms there. I find I am not at all atypical in my quest to further my own education to help my son.

In contrast, the resource teachers in my son’s school district were given one 2-hour presentation in Project Read, although the woman who did that—and poorly, I might add, as she suggested teaching all the vowels on one day, among other ill-informed changes to the program—has since left the district. No resource teacher has more than this overview in any O-G method. During my classroom observations, general education teachers used techniques that included teaching kids to guess at words from the pictures. 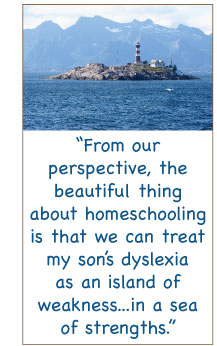 The absolutely beautiful thing about homeschooling is that we can treat my son’s dyslexia as an island of weakness—I’ve always pictured his island as about the size of Australia—in a sea of strengths.

He attends a weekly wilderness class, where he troops out, with 10 kids and two dedicated naturalists, for three hours into the mountains, or explores the tide pools and coastal bluffs of our California shoreline.

He had a weekly home school chess class from a company called “Academic Chess” and, at a local art studio, a home school art class called “Exploring the Masters,” where each week they study one great artist and draw a picture inspired by that artist’s technique.

He had a weekly home school Shakespeare class from an educational troupe called “Much Ado About Shakespeare,” where, much to my surprise, his difficulties with language do not prevent him from shining as a natural actor. This class is an incredible exposure to English history, dance, music, and psychology as well as performing. In addition to memorizing lines, homework consists of writing about topics like, “What would your character dream about as being their perfect life? What would they long for?” or “Write about an event in your character’s past, one that does not occur in the play, but that might impact the way he reacts in the play.”

My son’s greatest gift is in emotional intelligence, and questions like these are like ice cream to him. (At first he thought his character, the Earl of Westmoreland in Henry IV, Part I, would hate most to die in battle. After studying the play for a couple months, he decided that the Earl would like even less to be captured by the enemy. “Even if he were treated well and kept for ransom, it would be like a gilded cage. He would hate that even more than dying in battle.”)

I cannot imagine a public school giving him these opportunities at 9 and 10 years old.

In addition to these standing classes, he attends at least one, and sometimes up to three, field trips a month. Many of these field trips are free or under $7.

He’s been on a bald-eagle-watching cruise and a whale-watching cruise. For 20 stunning minutes, we watched a mother grey whale teaching her baby how to breach (leap completely out of the water).

He’s seen an opera, ballet, and musicals at Pepperdine University. On living history field trips, he has made adobe bricks, has ground corn with mortar and pestle and made tortillas as they did on the Spanish ranchos around here, all while learning about life in the mid-1800s. He has walked on stilts and rolled hoops as he learned about life in colonial times. He knows how to load a musket and fire a cannon. He toured Air Force One and has been inside WWII tanks, fighter planes and bombers. He has spoken with a WWII fighter pilot and asked him how it felt to watch his friends’ planes get hit. He’s seen Sutter’s Mill, where they first discovered gold in California, and toured the museum there. He’s toured a guitar factory and a bakery.

And all before he was 10 years old.

This year we are signed up for art museum tours at the Getty Museum and L.A. County Museum of Art. He’ll be attending a series of six homeschool days at Los Angeles’s California Science Center, where they explore laws of gravity, force and motion while building roller coasters and rockets, wind power while building a sailboat, do experiments with acids and bases, electricity, and more. He’s going to three science theatre performances, too. Here’s a description of one: “Learn all about force, inertia, velocity, acceleration, push, pull, gravity, and Newton’s laws of motion. What are action and reaction? Can a child lift an adult twice her size? What are the three types of levers? How do simple machines trade force for distance and help us do work?” The other two performances are on electricity and the human body.

Next spring he’ll be going on an overnight camping trip at the Santa Barbara Zoo, where they get to feed animals and explore the animal hospital, kitchen, and other behind-the-scenes areas. Last year he went to a homeschool day at the Monterey Bay Aquarium.

And everywhere he goes, he talks to the docents, to the naturalists and scientists and boat captains and marine biologists, to the performers and factory workers and bakers and volunteers. He is learning about vocations and passions, how people come to do what they do with their lives. He empathizes and communicates and listens and shares.

His retention of knowledge presented in this hands-on, multisensory, people-oriented way is so much better than if he were reading it, or listening to it read to him, from a book.

His at-home academics this year, in addition to reading, writing and math, are American history (we’ve just spent six weeks studying the Revolutionary War) and biology. He’s also learning touch typing, as his dysgraphia is extremely limiting to his writing. (I attended an all-day seminar on Handwriting Without Tears, a nationally renowned handwriting program, and when shown my son’s writing samples afterwards, the instructor said, “Put him on a computer.”),

He does the usual afterschool sports. This year, volleyball, basketball, and soccer.

My son is a 4th grader this year. He’s reading at about a mid-3rd grade level, I’m guessing, and improving in leaps and bounds. His fluency has improved dramatically this fall, and his prosody is wonderful (though his oral reading is still somewhat halting, in a recent chapter book he even read the cowboy dialog with a twang. It is a delight to listen to him read dialog!). His writing is an enormous struggle still. But he is making progress.

I read to him quite a bit, sometimes a couple hours a day. We often listen to audio tapes while driving to field trips and classes. (I’m just realizing that the cowboy twang comes from the many audio books in the Hank the Cowdog series, written and performed by the delightful John Erickson.)

I was a helping advocate for a public-school 5th grader two years ago. She’s had an IEP since the end of first grade. Her CTOPP (Comprehensive Test of Phonological Processing) and IQ scores are much higher than my son’s. In 5th grade, her GORT (Gray Oral Reading Tests) scores put her oral reading at the kindergarten level.

Since then she has repeated 5th grade and made only three months’ improvement in her reading scores. Her exposure to other subjects is limited, as much of it is based on reading level. On a WISC-IV (Wechsler Intelligence Scale for Children® — Fourth Edition), her vocabulary and world knowledge scores dropped several points compared to three years ago. (The school psychologist in an IEP (Individualized Education Plan) meeting said this was “typical of resource students.”) With limited school funding and an emphasis on reading, writing, and math, her school has a science class just one day a week and art, taught by parent volunteers, just once a month.

I cannot think of a single aspect of my son’s life that would be improved if he returned to public school. Even socially, he is much more stimulated by homeschooling than by public schooling (I didn’t mention that in addition to his classes and field trips, there are weekly park days, where the kids build forts and play wonderful, creative, made-up, running-around games while the moms sit and compare curriculum ideas, field trip ideas, volunteering ideas, books, etc.).