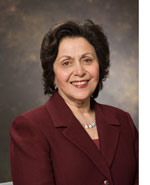 Sally E. Shaywitz, M.D., the Audrey G. Ratner Professor in Learning Development at the Yale University School of Medicine, is the Co-Director of the Yale Center for Dyslexia and Creativity. Dr. Shaywitz received her B.A. (with honors) from the City University, where she was elected to Phi Beta Kappa, and her M.D. from Albert Einstein College of Medicine. She has devoted her career to better understanding and helping children and adults who are dyslexic. Her research provides the basic framework: the conceptual model, epidemiology, and neurobiology for the scientific study of dyslexia. Together with her husband, Dr. Bennett Shaywitz, she originated and championed the “Sea of Strengths” model of dyslexia which emphasizes a sea of strengths of higher critical thinking and creativity surrounding the encapsulated weakness found in children and adults who are dyslexic. Dr. Sally Shaywitz is the author of over 200 scientific articles, chapters and books, including the widely acclaimed national best-seller, Overcoming Dyslexia: A New and Complete Science-Based Program for Reading Problems at Any Level (Knopf, 2003; Vintage, 2005) which received the Margo Marek Book Award and the NAMI Book Award.

Dr. Shaywitz, an elected member of the Institute of Medicine of the National Academy of Sciences, has received numerous honors for her work in advancing the scientific understanding of reading and dyslexia, including an honorary Doctor of Science degree from Williams College; the Townsend Harris Medal of the City College of New York; the Annie Glenn Award for Leadership from Ohio State University; the Achievement Award in Women’s Health of the Society for the Advancement of Women’s Health Research; and the Distinguished Alumnus Award of the Albert Einstein College of Medicine. Each year, Dr. Shaywitz has been chosen as one of the “Best Doctors in America,” one of “America’s Top Doctors,” and one of “New York’s Top Doctors.” Castle Connolly Medical, America’s trusted source for identifying top doctors, has selected Dr. Shaywitz for its 16th and 17th editions of “Top Doctors: New York Metro Area.” In recognition of her contributions to the National Academy of Sciences, Dr. Shaywitz was honored with the distinction of being named a National Associate of the National Academies. Dr. Shaywitz recently served on the Advisory Council of the National Institute of Neurological Diseases and Stroke (NINDS), and currently serves on the National Research Council Committee on Women in Science and Engineering, the National Board for Education Sciences, the National Advisory Board of the National Center for Learning Disabilities, and the scientific advisory board of the March of Dimes. Dr. Shaywitz co-chairs the National Research Council Committee on Gender Differences in the Careers of Science, Engineering and Mathematics Faculty; she has most recently served on the Institute of Medicine Committee on Understanding the Biology of Sex and Gender Differences; on the National Reading Panel; and on the Committee to Prevent Reading Difficulties in Young Children for the National Research Council. Dr. Shaywitz also serves on the editorial board of the Journal of Learning Disabilities and Learning Disabilities: A Contemporary Journal.

Bennett A. Shaywitz, M.D., the Charles and Helen Schwab Professor in Dyslexia and Learning Development, is the Chief of Pediatric Neurology and Co-Director of the Yale Center for Dyslexia and Creativity at the Yale University School of Medicine. Dr. Shaywitz received his B.A. from Washington University, where he was elected to Phi Beta Kappa, and his M.D. from Washington University School of Medicine. He completed his pediatric training, including serving as Chief Resident, and then a postdoctoral fellowship in Child Neurology at the Albert Einstein College of Medicine. Dr. Shaywitz has a long-standing interest in disorders of learning and attention in children and young adults. He has devoted his career to better understanding and elucidating the neurobiological basis of reading and dyslexia and to ensuring that this new knowledge is translated into the better care and treatment of children and adults who are dyslexic. Early on, Dr. Shaywitz recognized the great potential of functional brain imaging and led a national effort to apply functional imaging, especially functional magnetic resonance imaging (fMRI), to the study of reading and dyslexia in children and adults. He has made major contributions to understanding the neurobiology, specifically the brain organization for reading, including the identification and localization of specific neural systems for reading; delineation of differences in these systems between good and poor readers (including a neural signature for dyslexia); the functional role of the system for fluency; the finding of at least two neurobiological subtypes of reading disability (one, primarily inherent; the other, more environmentally influenced); and the demonstration of plasticity in the neural systems for reading and their ability to reorganize in response to an effective, evidence-based intervention.

The author of over 300 scientific papers, Dr. Shaywitz has received many honors for his contributions to the understanding of the basic neurobiology of reading and dyslexia, including election to membership in the Institute of Medicine of the National Academy of Sciences, Distinguished Alumnus Award from Washington University, the Annie Glenn Award for Leadership from Ohio State University, and by selection to deliver the New York University Medical Scientist Training Program Honors Lecture. Dr. Shaywitz was also selected, along with Dr. Sally Shaywitz, as recipient of the Haggerty-Friedman Distinguished Lectureship at the University of Rochester; the Lawrence G. Crowley Distinguished Lectureship at Stanford University; the Waldo E. Nelson lectureship at St. Christopher’s Children Hospital; the Leonard Apt Lectureship of the American Academy of Pediatrics; and the Sidney Berman Award for the Study and Treatment of Learning Disabilities presented by the American Academy of Child and Adolescent Psychiatry. Each year Dr. Shaywitz has been chosen one of the “Best Doctors in America,” one of “America’s Top Doctors,” and one of “New York’s Top Doctors.” Castle Connolly Medical, America’s trusted source for identifying top doctors, has selected Dr. Shaywitz for its 16th and 17th editions of “Top Doctors: New York Metro Area.” Dr. Shaywitz currently serves on the Scientific Advisory Board of the March of Dimes; he also currently serves on the National Vaccine Program Office Safety Subcommittee and has served on the Institute of Medicine Immunization Safety Review Committee. Dr. Shaywitz sits on the editorial board of Pediatrics in Review, Learning Disabilities: A Contemporary Journal, and Child Neuropsychology.