Kent Sinclair had long considered forming a group for adult professionals with dyslexia, a disorder he shares.  What Sinclair, a partner in the Boston office of the national legal firm Seyfarth Shaw LLP, envisioned, as opposed to a conventional support group, was a “network and affinity group,” a place for camaraderie and sharing strategies for navigating the professional work environment. 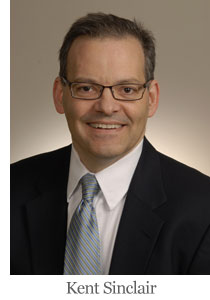 A prime motivator for Sinclair was a desire to make the world more accepting of his dyslexic daughter and others like her, so that they do not face “some of the challenges and isolation that go with being dyslexic in the working world.  I wanted to send a message to her that it’s okay that our brains work differently, that it’s not a negative, and that in some ways it’s actually quite positive,” says Sinclair.

Despite the advances made in the understanding and treatment of dyslexia, Sinclair says that there is still a lot of ignorance and bias about it.  According to a 2010 Roper poll, 80 percent of Americans associate dyslexia with mental retardation.  Consequently, many people are afraid to reveal their dyslexia to employers for fear of losing their jobs or being blamed if something goes wrong on their watch.  In addition to feeling shame and embarrassment about their own dyslexia, parents of dyslexic children are often riddled with guilt for passing the disorder on to their offspring.

To provide a forum to address these issues, Sinclair swung into action.  He approached the head of his law firm about hosting a meeting for professional adults with dyslexia.  His company agreed, and the Massachusetts Branch of the International Dyslexia Association (MABIDA), of which Sinclair is a board member, offered to co-sponsor the first meeting.  Sinclair’s firm, a strong supporter of diversity, publicized the meeting in an email blast to clients, MABIDA spread the word via its newsletter, and area schools, such as Landmark, Carroll, and Wheeler which specialize in language-based learning differences, sent notices home to parents about it.

That initial meeting, in November 2010, attracted 40 people, half of whom were dyslexic and the other half mostly parents, teachers, clinicians, and students.  One attendee, a Landmark School alumnus, flew in for the meeting from Corpus Christi, Texas.  “That’s when I knew I had tapped into something, for someone to get on a plane to attend,” says Sinclair.

Several people also came to observe, some wondering if they could bring a dyslexic child to future meetings, which Sinclair had to discourage.  “This is not a place to observe people with dyslexia,” he told them.  “It is a place for adults with dyslexia or similar language-based learning differences to share their experiences.”  One of the attendees pointed out that young people often have access to support for their dyslexia, while  “there’s nothing out there for adults.  Once people are in the working world,” he said, “they’re on their own and can be completely isolated.”  Others agreed, and the decision was made to limit future participation to adults only.  Sinclair is, however, willing to address student groups on request.

Since that first meeting, about 35 to 40 professionals, mostly from Boston, with a sprinkling from western Massachusetts, Connecticut, and Rhode Island, have gathered in a Seyfarth Shaw conference room “once a quarter, unless I’m overwhelmed with work,” says Sinclair.  Although attendance numbers are consistent, people rotate in and out, with about a 50 — 50 split between those who have attended one or more meetings and those who are coming for the first time.

Meetings kick off with refreshments and a social period, followed by a presentation on a particular facet of dyslexia and a discussion.  Sinclair is gratified by the positive response the group has generated.  “I’ve been surprised by how genuinely people have been impacted by what goes on at our meetings and finding that there’s a group out there like this,” he says.  “There’s no other affinity group out there that targets professionals with dyslexia.”  While he knows of a support group in New York City for people with dyslexia, it doesn’t focus exclusively on adult professionals.  The International Dyslexia Association has offered sessions for adults with dyslexia, but primarily on an ad hoc basis, not as part of a continuing program.

Matthew Schneps, director of the Laboratory for Visual Learning at the Harvard-Smithsonian Center for Astrophysics, has been an active member of the group since its inception.  He also spoke at an early meeting on the science of dyslexia, which resonated strongly with the group.  He was joined by a researcher from the Yale Child Study Center who discussed genetic issues relating to dyslexia and by a MABIDA board member who focused on the neuroscience of dyslexia.  Inspired by these presentations, two group members signed up for help in learning how to read.  Another success story resulted from a presentation on dyslexia in the workplace by Kirsten Olson, teacher, educational consultant, and author of books including Wounded by School: Recapturing the Joy in Learning and Standing Up to Old School Culture (2009).  After attending Olson’s talk, a teacher of young children revealed her dyslexia to her employer and returned to school to pursue a master’s degree in education.  This woman has also joined Sinclair in addressing student groups, including a class at the Harvard Graduate School of Education.

Sinclair has high praise for Olson, who he says attends meetings frequently and spreads the word about the group through clients of her educational consulting firm.  “She’s been very supportive and is interested in adults with dyslexia and what happens to them in the real world,” he says.  “She’s involved in issues of educational reform and the impact of educational experiences in their adult lives.”

Matthew Schneps attests to the value of the group for all participants, including those who, like himself, were not diagnosed when young and did not have access to the support available to students today.  “Many adults with dyslexia, especially if they’re older,” he says, “live with their dyslexia without knowing that there is a community of others who are just like them, who share many of their concerns, problems, joys, and challenges. For those people, attending a meeting is often the first time they come face to face with others their age who have dyslexia.  It’s an eye-opening experience that feels a little bit like going to Thanksgiving dinner with family members you see only occasionally.  There is a wash of recognition, that all of us at the table are similar in some way, that we have behaviors and experiences in common, much like a family.”

Members of the group run the gamut of ages and professions and attend meetings for a variety of reasons.  At the younger end of the scale is the vice president of a financial-management firm in Boston who attended schools specializing in learning differences and graduated from college in 2007.  He particularly enjoys the opportunity that meetings present to interact with people who share similar backgrounds and experiences.  “In my professional life,” he says, “no one knows about my dyslexia, and I don’t want any benefit or disadvantage because of it.  Everyone has advantages and disadvantages, and I wouldn’t want it any other way.”  While he would not tell his co-workers about his dyslexia, he says he wouldn’t mind if they found out.  Getting together with such a diverse group of professionals, he says, “is well worth the time I spend there, for the people all have different perspectives on issues.”

Another enthusiastic group member is Rachel Moran.  Diagnosed with dyslexia at 18, she attended special-needs classes during high school but graduated with a fourth-grade reading level, despite having reading-comprehension abilities well above college level.  “I have a very high IQ,” she says, “but I was never trained as I should have been.”  Now a licensed electrical engineer and the owner of an engineering company specializing in railroad signaling, Moran is also the mother of a son with dyslexia and ADD.  Attending meetings helps her stay current with the latest research about dyslexia, and the pre-meeting receptions provide a counterpoint to the solitary nature of her work, which she conducts largely from home.  “It helps you be aware that you’re not alone,” says Moran.  “Everyone has their challenges, but sometimes you feel like you’re the only one dealing with a problem, and to find someone who has dealt with that problem makes your task a little easier.”

Angela Puccini recently graduated from Suffolk University Law School and passed the Massachusetts Bar Examination, an impressive set of accomplishments by any standard.  They are even more remarkable, given Puccini’s longtime struggles with dyslexia and the fact that she was unable to read until age 12. She intends to apply her education and experiences to “a career addressing both the hardships and benefits of dyslexia.”  Puccini says that a major benefit of participating in the group has been “the opportunity to talk to others who understand the nuanced difficulties of dealing with dyslexia beyond the academic experience.”

While Sinclair is pleased with the group’s successes to date, challenges still remain.  One of these is to attract more high-profile dyslexic speakers, which he feels would generate greater interest and attendance by members.  Another challenge is to help the significant number of members who have continuing social and emotional needs, which he says are often the result of educational damage inflicted in childhood.  Sinclair believes that many would benefit from mentoring relationships to help them with their careers.  To a certain degree, this has taken place, with younger members helping older ones in technological areas, but not to the extent he had hoped it would.  Sinclair is working with MABIDA to help fill some of these needs.  While he describes the work he has done with the group as “tremendously rewarding personally,” Sinclair believes it will soon be time to step back and let other members take a more active role in planning meetings and other activities.

Schneps, who has a grant to study professional scientists with dyslexia, frequently hears from people who have discovered, late in life, that they have the disorder.  “A lot of them who are in their 60s and older found out when their children were diagnosed,” he says.  “Their lives had been a kind of mystery to them, why they did the things they did.  Then they find they’re dyslexic, and their lives make a lot more sense to them and they want to share their experiences.  They were told there was something wrong with them, but then they find, ‘There’s nothing wrong with me, so why should I feel bad?’  So this forum gives voices to a lot of people who have sat silent all their lives.“