Football abounds with tackles on the field, but recent news has highlighted that dyslexia is a challenge that some NFL players and coaches tackle as well.

New York Jets quarterback Tim Tebow was diagnosed with dyslexia when he was seven years old.  Before coming to the NFL, Tebow attended the University of Florida, where he not only won the Heisman Trophy playing for the Florida Gators, but also graduated with honors.

Dyslexia is a commonality that Tebow shares with Jets coach Rex Ryan.  Ryan and Tebow don’t converse about their dyslexia, but in a USA Today article by Simon Samano, they spoke of their admiration for one another, regardless of the mutual bond they share, and they both agree that their dyslexia definitely doesn’t hinder their game, and it may even help.  As Tim Tebow told Samano:  “I don’t think it makes me respect him more, because I respect Coach Ryan a lot.  What it does is just show that learning disabilities, especially dyslexia, have nothing to do with how smart or intelligent someone is.  Because there are not many minds in the NFL that are as bright or as sharp or as flexible as Coach Ryan’s.” 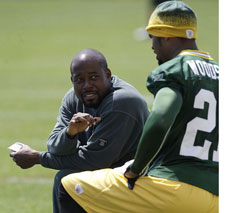 Another dyslexic and rising star in the NFL coaching staff is Packers defensive back coach Joe Whitt Jr..  The skills that Whitt developed to overcome his dyslexia in school also help the players he coaches.  He explained to Bob McGinn of the Milwaukee Journal Sentinel, “I’m dyslexic.  Growing up, I had to learn things differently.  With some of my issues, I could relate to Sam.  I taught him a little bit different, and it worked.”

Whitt is also looking to inspire kids to read—to make reading “cool” so that even if reading is hard for a young person, he or she will still make the effort.  Whitt signed on to a nationwide library literacy campaign that encourages people to take some time this summer to read.  Whitt’s own children are the inspiration for these efforts.  He spoke to the Journal Sentinel’s Lori Nickel about this: “It takes me a long time to read a book, to be honest with you. But I fight through it. I’m trying to read as much as I can, because my kids are young and I want them to see Daddy reading.”

Read more about how Whitt works with his players and his great potential to climb high on the NFL ladder in Nickel’s article—click here.