At a recent gala event at the Liberty Science Center in New Jersey, Drs. Sally and Bennett Shaywitz were presented with LSC’s “Genius Award” for their groundbreaking work on dyslexia.  To begin the presentation of the award, the audience was shown a specially-commissioned video that celebrates the lives and careers of the Shaywitzes.  The video was very warmly received by those in attendance, with many people saying how moved they were to see how many families the Shaywitzes have helped over the years and how far the science around dyslexia has come thanks to their work.  Watch the video here: 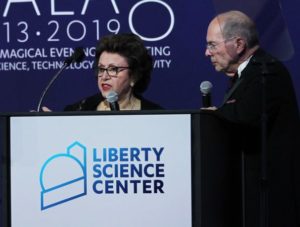 David M. Daly, a Gala corporate chair and president and COO of PSE&G, then introduced Drs. Bennett and Sally Shaywitz as the world’s leading experts in dyslexia.

“Lab partners for 35 years and marriage partners for 55, the couple are the world’s experts on dyslexia,” Daly said. “They have discovered dyslexia’s scientific basis, pioneered effective strategies and changed public attitudes. And, for more than three decades, they have been studying 455 people with dyslexia, starting when they were at the age of 5.” 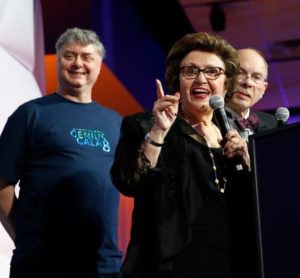 “We are honored and especially pleased to be able to shine light on dyslexia. Dyslexia is highly prevalent, affecting one in five, 20% of the population and yet so often overlooked. We hope that as a result of highlighting our work on dyslexia many children and adults with dyslexia will benefit and see how they fit our Sea of Strengths model of dyslexia, and recognize that though they may be slow readers they are fast thinkers. Our deep hope is that each of you here this evening will come to understand dyslexia, and help to remove the stigma of dyslexia and know that with dyslexia you possess an extraordinary sea of strengths in higher level thinking, reasoning, thinking out of the box, and problem solving.”

“If you or your child is dyslexic, make sure that they know they are smart and have higher-level strengths, and that as they go through life, they are defined by their strengths, and not their slow reading and poor spelling.

“We also want to recognize that our research and advocacy represents a team effort. A very special member of our team is here with us this evening and we want to acknowledge what a major role her caring and brilliant brain has played in our work.” 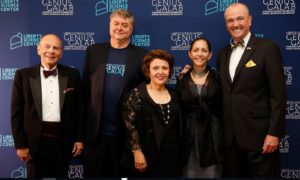 Responding to the Paul Hoffman’s query of “What are the most important scientific questions about dyslexia that remain to be answered?”

“As dedicated physician scientists, while we always seek new knowledge, in the case of dyslexia, we have sufficient knowledge so that rather than a knowledge gap, we have an action gap. We must act on the knowledge we have. For example, we are now able to leverage the power of The Connecticut Longitudinal Study, (CLS), a prospective epidemiologic, longitudinal study, now in its 35th year, to identify critical factors that influence the development of dyslexic children and adults, and to determine the long-term adult consequences of dyslexia. For the first time, we have the unique opportunity of providing an urgently needed understanding of which predictors lead to which adult outcomes of childhood dyslexia. We will be able to understand not only the consequences of dyslexia but those factors that may exacerbate or ameliorate outcomes and be in the extraordinary position to act on that knowledge to the immediate benefit of dyslexic individuals.”

“Most schools in our country do not even think about identifying dyslexic children until 3rd or 4th grade, if then. Examining our 35-year longitudinal data, we were able to demonstrate that the achievement gap between typical and dyslexic readers is evident as early as first grade, and persists. Once we saw this, we were inspired, we knew that we had to do something to make sure schools begin to identify children at risk early, in kindergarten or first grade. And so we developed an evidence based, reliable, efficient and inexpensive screener for dyslexia that is completed by the child’s kindergarten or first grade teacher on a tablet in 5 minutes and the teacher immediately is told whether that child is at risk. Our screener has been adopted by many school systems, and in fact, schools in the entire state of Missouri. If we are to really begin to identify and treat as early as possible the 20% of children with dyslexia, we need to make sure that universal screening for dyslexia is implemented in kindergarten or first grade throughout the nation.” 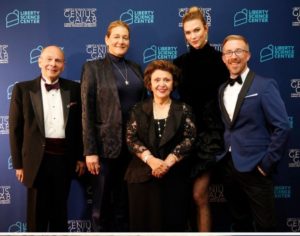 Since the event took place the day after Mother’s Day, Paul Hoffman asked “What’s one thing you each learned from your mom?

“My mother was deaf, and I think my interest and compassion for people with disability can be traced to growing up with her. She taught me that you could have a disability, but you don’t have to be disabled.”

“My mother died when I was still a teenager, but she remains a huge presence in my life. She taught me to be strong and to believe in myself and not to fear taking a less popular or less traveled path and as she exemplified, to be compassionate.”