Barbara, in blue, with husband Norm, and children, Hope and Bradley

I am the last person anyone would go to for information about dyslexia.  I grew up as the classic bookworm. My goal was to read every book in my town library, and, from the piles of books I checked out each week, one would think that I might have succeeded!   Reading was my pleasure (and even my guilty pleasure, when it was after my bedtime).  The last time I was tested, in seventh grade, I read five times as fast as the second fastest reader.  By that point, my book-a-day habit was long established.

Now fast-forward twenty years:  I was a new mother, starting excitedly to read to and with my two young children.  We began with old classics, and quickly discovered new favorite authors as well.  Every car trip meant Dad driving, and Mom reading aloud.  Our son especially liked to be read to, and paid rapt attention.

Within a few years, however, it was clear that our kids did not share my love of reading.  While they might enjoy being read to, reading themselves was something that had to be externally imposed.  Summer reading lists were often still unfinished by Labor Day, and TV was the activity of choice for evenings and sick time.

Both kids attended an excellent K through 9 private school, and both had been tested repeatedly.  I suspected that something might be wrong with our son’s reading, just from the halting way in which he read aloud; however, when I inquired, I was told that his reading was above grade level. He had taught himself to read, very early, in a way that I refer to as the “gestalt method”—one whole word at a time.

“The fact that he read above grade level, and that he learned to read easily and early, convinced the staff that he did not have a reading problem.”

Rather, they postulated that his superior math skills were making reading seem comparatively more difficult, causing him to think that he wasn’t good at it.  The faculty did think that he had ADD, but we followed their suggestion and had him privately tested, but the psychologist did not confirm the diagnosis.

Our daughter, like many younger children, learned many things by osmosis, while our son was mastering them.  By then their school taught reading using the Letter Land technique, so her decoding skills far exceeded her brother’s.  Her grades were good, and everyone at school loved her.  She never read for pleasure, though, and even tuned out when others were reading aloud. She sometimes came home saying things like “I’m the dumbest person in my class”.  It was a school full of very bright, achievement-oriented kids, so I always just reassured her that that wasn’t true.  She was a poor tester, especially on standardized tests, but we thought it was an anxiety issue.  The headmistress suggested that she attend a less competitive boarding school, but she would hear none of it, and was able to get into the most competitive ones using her grades and recommendations. 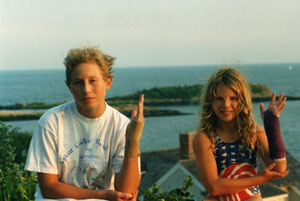 Things went on this way for many years, through private and public school for our son, and through half of boarding school for our daughter, before our son’s inability to keep up with the reading assigned at his very competitive liberal arts college caused us to take another look.  We had heard about the Shaywitzes, and were able to get him an appointment a few months later.  Our daughter, upon hearing this, asked to be tested also.  I told her that she had no academic problems and couldn’t have issues, but I mentioned it to Sally, who said that dyslexia runs in families, and that we might as well test both children.  Since my husband is a gifted reader, and also a lawyer (a profession marked by constant reading), we wondered where this trait could have originated. We did, though, agree to test our daughter too. 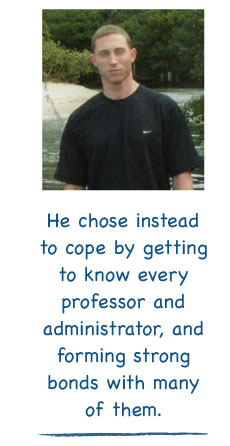 Our son did turn out to be dyslexic.  Once we knew that, he confessed that he had tried his hardest to avoid being labeled, so we suspect strongly, given other signs, that he has ADD as well.  He resisted accommodations throughout college, as well as course selection or tutoring to alleviate the issues. He chose instead to cope by getting to know every professor and administrator, and forming strong bonds with many of them. That led, in its own way, to a set of individual accommodations, something that is probably only possible at a smaller school. He did, however, graduate, and he continues to educate himself.  He now reads for pleasure, attends lectures and plays, and loves poetry festivals.

The big surprise was our daughter, who was dyslexic to the exact same degree as our son, albeit with some difference in deficits and strengths.  Her school granted her accommodations within a week after receiving the Shaywitzes’ report.  She had been succeeding, but struggling, with the workload to that point.  Her next report card was an eye opener for all of us.  Her math teacher said that she was “the child for whom accommodations are made”, and cited her increased confidence, participation, and grades.  She eventually took AP Statistics, receiving an A plus and being the runner-up for the school prize in that subject.  Grammar was difficult for her to master, but she became a wonderful and confident writer.  College has been a triumph for her.  She also chose to attend a small liberal arts college, and she has taken advantage of what accommodations are offered.  Not only have her grades been stellar, but also she has been invited to be both a teaching fellow in the sciences and a writing tutor, in addition to competing in two team sports, one as captain.  If she were to describe herself in just a few words, “dyslexic” would be one of them.  She’s dyslexic and proud of it, because she knows that many of her accomplishments have been hard won.

As their parent, I regret and am abashed that my knowledge about dyslexia was so minimal, and that we waited so long to act on what symptoms there were.  We still haven’t found the dyslexic part of our family tree, but we’ve learned that there is probably a little dyslexia in everybody. It’s also clear to me now that dyslexics have strengths, often developed as a way to compensate for weaknesses.  For example, our son can find anywhere he’s been once before—maybe to avoid reading directions, but a great talent whatever the reason.

We’ve also come to understand that even well-meaning educators can’t substitute for the nagging feeling of a parent that maybe something is not quite right.  So many of us are brought up to listen to the teacher, and that is even more true when your children are attending some of the finest schools in the country.  In fact, private schools are often less equipped than public ones to identify and assist with learning issues.  Part of that may have to do with resources, but it’s also partly due to the private school penchant for calling every student above average—there’s no place worse to carry a label. 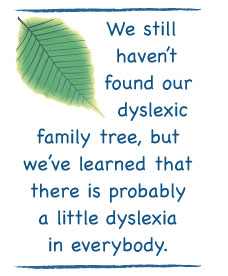 In some ways, my children may be better off for having had to work harder than others to achieve, and they will certainly be more understanding about the weaknesses and insecurities of others, a trait that will serve them well in the world.  A little part of me, though, cringes every time that I read something about the importance of self-confidence in a child’s life.  While my children have achieved, and will achieve, great things, I bear the weight of responsibility for not doing more to ensure that they feel as good about themselves as they possibly could.  In fact, my work with the Yale Center for Dyslexia and Creativity comes out of my desire to give to other children what it took me years to give my own.

The Best Things I Did for My Dyslexic Child

My son has dyslexia. He is now 41 and a successful lawyer, but getting through school, and his academic frustrations, was a challenge we all learned from.