At a faculty meeting that I will never forget, Lucinda Lee Katz, the head of our school, once explained that one of the most significant challenges parents face is moving from the idealized version of their child, to the real. As both a teacher and a mother, I winced as she said it, and when I looked around the room and witnessed many pained expressions, I knew I wasn’t alone. 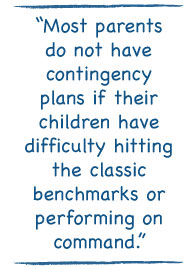 Accepting the real version is even more challenging in a culture populated with parents who start making college plans for their children before they learn to hold a spoon.  Their careful planning and concerned logic have clarity until the child becomes a delayed spoon holder…or even worse, a late reader or writer.

When it happens, many of these parents choose to ignore the signs of delay.  Others misunderstand the symptoms and punish their children or label them lazy or misbehaved.  There are some who decide that there is no time to waste and put a strategy together to fix their child.
I was a mixture of all of the above.  When my only son, Dylan, was in preschool I was loaded with the expectations of a typical, hopeful mother.  I did not get as far as college when planning my son’s future, but I was guilty of hatching my own early academic plan for him.  I fantasized about what it would be like to teach him everything I had decided was critical to academic superstardom.  I was smugly convinced that this was when my years of teaching and observing children would really pay off.

Almost immediately, Dylan showed signs of delay with every benchmark, from learning letters and sounds, to writing his name; I started to get my first whiff of what kind of adjustments might lay ahead.  As I watched my friends’ kids, all younger than Dylan, conquer every task and skill many months earlier than he, each delay felt like a warning flag.  However, I disregarded most of them.  Every early childhood education expert warns parents not to read too much into these early indications.  I tried to heed this advice, wary of being one of those obnoxious academic stage moms.

For my husband and me, it wasn’t hard to put off the truth.  We found accomplices everywhere.  From kindergarten to fourth grade, there were educators and evaluators who told us our son was too young for a formal diagnosis of dyslexia; many characterized his struggles as a learning lag; other experts told us that there was no such thing as dyslexia.  My son’s own innate facility with oral language, interpersonal intelligence, humor, and general earnestness helped stave off concern for many of those years. The lack of effective interventions for students with his profile also contributed to our denial.  For many years—too many years—we hid behind the belief that there was little incentive to label him if there wasn’t effective remediation available.

With all of these opportunities for ignoring the truth, it is no wonder that we, like many other parents of dyslexic children, clung to the idealized version of our child.  Unfortunately, denial is an option only when the consequences of avoidance are benign.  In the case of learning issues, and more specifically dyslexia, educators and brain researchers now know that early intervention is essential to transformative remediation and developing alternative pathways in the brain.  But despite the advantage of having a teacher-mother, Dylan never benefited from early intervention; denial had won out.

By fourth grade, Dylan still hadn’t learned to read and we were desperate. It wasn’t enough that our son was taught by understanding teachers and had access to special tutors after school.  None of it was enough. When I heard some parents and colleagues mention that several students had achieved significant gains with immersion multisensory techniques employed by methods like Slingerland, Orton-Gilligham, and Lindamood-Bell, I decided we had no time to waste.  I did some research and realized that there was a Lindamood-Bell center just blocks from our school. At that point, we had nothing to lose: Dylan had to learn to read. 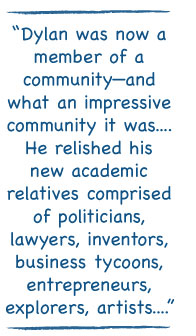 Once our son entered into the world of Lindamood-Bell, our family and our school had to get used to the word “dyslexic.”  This was the first time the label was explicitly used to explain his challenges.  Until that point, I had been hesitant to use the word because it’s not very specific.  Dyslexia describes an unexpected difficulty learning to read, but it does not explain why someone with the condition might also have trouble with spelling, writing, and sometimes, math facts.  Every dyslexic is different.  Furthermore, one of my educational gurus, Mel Levine, had always warned against labeling.

My son’s reaction to the dyslexic label convinced me that my reservations were a form of educational elitism.  He was delighted with the new word; it helped to contain his condition. His learning challenges could no longer be confused with generalized stupidity.  He even liked the sound of it.
Some of our more successful adult friends started confessing to him that they struggled with dyslexia themselves. They lent him encouragement, reassurance, and sent him articles charting the accomplishments of people in his new club.

Something extraordinary happened, Dylan started feeling special just by association.   In fact, he started to use the word “dyslexic” to describe himself to his peers.  Perhaps it was a form of beating them to the punch. Either way, it went a long way in explaining why he sometimes left letters out of his own name or why his writing looked like a first grader’s.  The main point was that he wasn’t stupid.  The word actually gave him a new shot of courage to face his challenges. And as his elitist- educator mom, I decided that the word wasn’t so bad after all.