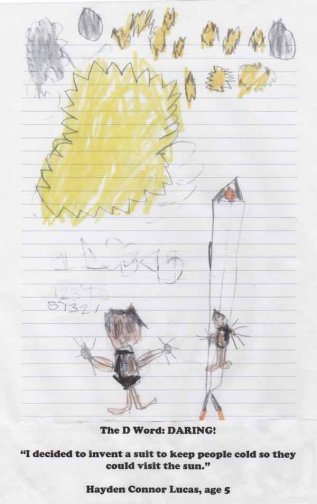 “Hayden did his drawing after he saw the documentary, The Big Picture: Rethinking Dyslexia. At first he was sad and said, ‘D is for dumb…for dyslexia.’

“But then, it was almost like he was possessed—he told me he had to draw something. ‘D is for DARING!’ he told me. He saw Sir Richard Branson in the film, and I told him that he was dyslexic and he was going to build a plane to take people to the moon. He said when he grew up he wanted to invent a cold suit so people could visit the sun.

“Hayden thought he could do anything after he saw the film…. He also realized he had dyslexia. He shouted, ‘Mom, I have dyslexity!’ And I knew he was right! Windward School, where he attends, said, ‘He’s so smart he diagnosed himself.’ “

“To Spell the Word Spell” by Liza Pilsbury

“Only I Can Understand”