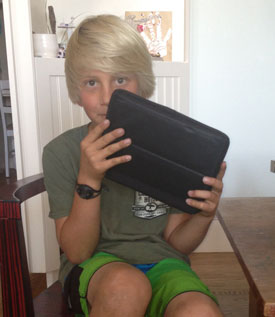 Pierce, with his iPad

Last fall, the fifth graders in my class were the lucky recipients of iPads–one for each student. Thrilled and curious, we experimented (as a class and individually) with the different possibilities embedded in the apps and features. There were new ways to practice math facts, explore other countries, consume content, connect with other classrooms, create films and slide shows, animate information and document learning. But all those bells and whistles paled in comparison to the breakthrough that the device offered one of my dyslexic students. While his iPad discoveries were personally beneficial to his fifth grade year, these revelations have profoundly influenced my teaching strategies for any student with a similar learning profile.

Any iPad, version 3 or higher has Speech to-Text capabilities.

Certain other mobile devices, including Android devices, also have this feature.

Internet access is necessary for Speech-to-Text to work on the iPad and Siri must be enabled.

Speech-to-Text on the iPad works on any app with a keyboard–just tap the mic icon.

For more details and tips for using Speech-to-Text on the iPad,
please click here.

It all started with one clever and perseverant ten-year-old boy (Pierce) and one harried, but well-meaning teacher (me). When I first suggested that Pierce try using the speech-to-text feature on his iPad, I had minimal expectations. Unable to effectively assist him with a writing assignment, the speech-to-text (Siri) feature on his iPad was a last-ditch effort to respond to his frustration. I was hoping that giving it a try would keep him busy while simultaneously easing the guilt I felt for not being able to help him transcribe his ideas during a Writer’s Workshop session.  Pierce struggled with the same cruel disparity that haunts many dyslexic students: weak written expression concomitant with exceptional ideas, knowledge and intellectual abilities. I was always looking to find strategies to help him get his great ideas into the content of his writing. Although I had serious doubts about the iPads’s speech-to-text feature for classroom work, I thought it was worth a try.

Past explorations with speech-to-text technology had taught me that it was pretty finicky and limited in its ability to decode young male voices. Consequently, I was not surprised when Pierce returned at the end of the period with an unenthusiastic review of the feature. However, I did not anticipate the persistence he would bring to the mission. Pierce calmly informed me, “I will try bringing the iPad outside during Writer’s Workshop tomorrow and see if that helps.” Okay. I could hardly argue with his tenacity. At the end of the next day’s writing period, Pierce showed me some hilarious mistakes that the computer made in translating his voice. We laughed together and I naturally thought the iPad experiment was over.

Pierce simply said, “You should have seen how much wackier it was yesterday.”  And that is the way it went. Each day, the reports about his progress with the iPad improved as did Pierce’s mood. After several days, I almost fell out of my chair when Pierce commented that he was making real progress and he thought he should use the iPad speech to text for all his writing. Say what? I asked him to show me what he had been writing.It was quite impressive. Shocking, actually. I was particularly amazed by the amount of words on the page. Wow. Old Pierce used to reluctantly offer one or two messy, incomplete sentences to express what he knew, even though I knew (and he knew) he knew much more. New Pierce had written so much that it actually prompted a different, happier concern: How would he manage to copy edit all of these sentences?

Pierce’s next challenge is figuring out how to speak in complete sentences and how to include punctuation commands. However, he is confronting the challenge with his notable resourcefulness and determination. Probably the most amazing thing about Pierce’s process is how eager he is to share it with others and help them learn from his journey. I asked him what he thinks would be important for someone starting out with speech to text.

Pierce now considers speech-to-text his default option. He reports that speech-to-text on his iPad has changed school for him. I can confirm this: no more sparse written responses, no more complaining about writing time, and no more simmering frustration during written assessments. I can also add that it changed the writing process for several of his fellow classmates. Three of his classmates with dyslexia were clearly inspired, and maybe a little jealous, of Pierce’s new positive attitude and impressive level of written output. They have jumped onboard the speech-to-text bandwagon as well.

I am thrilled to report that Pierce’s written expression is much more aligned with his oral expression. This is big accomplishment for any student, but it is particularly transformative for a boy who is a passionate and talented student held up and frustrated by the mechanic expectations inherent in the school experience. There is no doubt that speech-to-text demands a little initial effort, but I will never dismiss its profound potential again.

Dyslexia and Civil Rights: Making Room on the Bus for All Children

My early experiences have become my bridge to understanding dyslexia and the plight of students whose strengths go unnoticed in the classroom.

Building a word-rich life for Dyslexics

A confession: I get a significant thrill from reading research that confirms my personal suspicions.

Rand Center: A Commitment to Accommodations