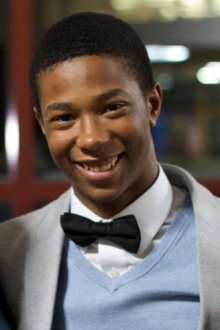 Things were going fine for young Joseph Harris before he got that second grade teacher. Sure, he got a little nervous when he had to read aloud. He didn’t know why he stumbled. And maybe he read a little slowly. But he loved books and school, until Ms. Fisher. Ms. Fisher decided he should do second grade a second time. Ms. Fisher said “learning disability”. The other kids said “stupid”, “go away”, and “don’t come on the swings, Joseph”. Then Ms. Fisher said “behavior problem”.

As an African-American boy in a Chicago Public School, Joseph’s prospects might have spiraled predictably, tragically downward.

He was labeled “disruptive”, he says, because he talked a lot. It never occurred to his teacher that he had a lot to say.

Fortunately, Joseph’s mother, Marva, had always told him he was bright. A single mother of three (who didn’t have the luxury of finishing college herself), Joseph remembers his mother “not getting along” with that teacher. His mom told Joseph to “pay her no mind and just do his work”.

Joseph was going places, no matter what, in his airplanes. He’d sketch, build them with anything in the house—paper towel tubes, toy car wheels, tape, pencils, milk cartons, straws—then revise the sketch and build again.

“I am a very creative kid. I was never bored. I am into architecture now and I may become an aerospace engineer. I have to be creative. I am not a 9-to-5 type of guy; I am hands on. Give me boats, engines, batteries…”

And Joseph persevered past the tainted trap of the early labels. By fourth grade, the reading aloud was out, and the standardized tests were in. Joseph Harris’ scores came in all above the ninetieth percentile, without diagnosis or accommodations. In class, Joseph was one of the few students not goofing off. In sixth grade he joined a squash program that brought a historically white sport to black kids in the city. He was in the top five on the squash team by the end of his first year.

Joseph Harris swung that squash racquet all the way from Chicago to the prestigious Hotchkiss Prep School in Connecticut. He was not evaluated for dyslexia until he was struggling with Spanish freshman year. A Hotchkiss alumnus paid for a private tutor that summer in Chicago to shore up Joseph’s English. Though phonics still don’t make sense to him, Joseph found it helpful to start from scratch with flashcards, building a word bank on a solid foundation.

Now entering senior year, Joseph still reads slowly depending on the subject—History is a slog, Shakespeare comes to a dead halt. He got a second language waiver for Spanish and extra time for testing. He learned to use audio files to be read to by his computer. His spelling isn’t great. He goes over things a few times. And Joseph now chooses to read to himself aloud to buttress his already good comprehension.

It wasn’t until recently that I got over being ashamed of being dyslexic. Now it’s something I wear on my chest proudly. I try to fully embrace all of the good and bad that comes with being dyslexic.

He doesn’t mind having dyslexia as long as he is at Hotchkiss. He doesn’t tell his friends back in Chicago. He believes to them dyslexia still means the stigma: little bus, separate lunch table, and dead-ended as dumb.

As a senior at Hotchkiss, he will apply this year to colleges. He doesn’t really want to talk about his Ivy League ambitions, but he probably wouldn’t mind if someone tipped off Ms. Fisher.