To: Our many YCDC friends and fellow passionate advocates for dyslexia
From: Sally Shaywitz, MD, Audrey G. Ratner Professor in Learning Development and Co-Director, YCDC

I am happy to share with you the welcome news that, at long last, dyslexia has had a hearing, an excellent one at that, held by the US Senate Health Education Labor and Pensions (HELP) Committee. On Tuesday, May 10th, a major Senate hearing devoted to dyslexia titled, “Understanding Dyslexia: The Intersection of Scientific Research & Education” took place. A huge shout out of appreciation and gratitude goes to Sen. Bill Cassidy (R-LA) and Sen. Barbara Mikulski (D-MD) for their commitment, understanding and incredibly hard work to make this meaningful bipartisan hearing take place. I am honored to have testified at this hearing on behalf of the Yale Center for Dyslexia & Creativity. Many have commented on the positive and constructive nature of the hearing, especially the bipartisan support for dyslexia often not evident in so many other issues Senators deal with. 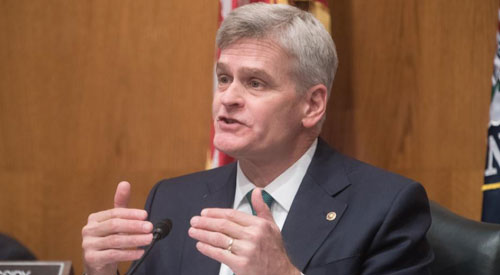 “Speak to any family with a child with dyslexia, you’ll hear stories about children struggling to read and they cannot. Often the parent had dyslexia too. Frustrated by an inability to read, boys act out and girls become shy, embarrassed to read aloud in class for fear of being mocked. And think about the teacher who sees a bright child struggle with reading, but may not have the training or resources to help that child become a better student and achieve their full potential.”

“The goals of the hearing are simple:

“There are good schools for kids with dyslexia; almost all are private. If you can’t afford the $10,000-$50,000 in tuition the family’s options are limited. This means, if the family is less wealthy, they quite likely cannot afford to have their child’s needs met. If that’s the one thing taken away from this hearing, this is time well spent. But that said, maybe your child is dyslexic and it has not been diagnosed. We’ve heard testimony from governors, superintendents, and other school administrators that screening for dyslexia is not happening. This despite the fact that Dr. Shaywitz will state that the achievement gap between typical and dyslexic readers is evident as early as first grade, and that this gap widens into adolescence. Based on this, all children should be screened at a young age and that those found to have dyslexia receive the necessary interventions.”

“There are three public charter schools in the nation that specialize in teaching dyslexic students. I’m proud to say that two of them are in Louisiana, the Louisiana Key Academy in Baton Rouge and the Max Charter School in Thibodaux. Parents choose to send their child to these schools and the goal is for the child to transition to a traditional school once their reading difficulty is addressed.”

“But let’s return to the fact that if a family can afford to pay $10,000-$50,000 in tuition their child’s needs can be addressed. Isn’t it interesting that there are many private schools specializing in dyslexia and only three public schools? Why shouldn’t a child attending a public school have the same opportunities as the child in a wealthier family? This is not about designer label clothes, it is about the ability to graduate from high school and get a better paying job. To that end we must also ensure that our federal education policies provide for the appropriate evidence-based services and resources in the traditional public school setting.”

“…the US Department of Education’s Office of Special Education and Rehabilitative Services issued a Dear Colleague letter that specifically clarifies that nothing in federal law prohibits the use of the word dyslexia in evaluation, eligibility determinations, and individualized education programs (IEP) for students. Anecdotally, however, state and local educational agencies are still reluctant to specifically reference the word dyslexia, thus denying such students the specific services they need to succeed.”

“If there is a call to action in this hearing it’s that science should begin driving policy. We have the dots, now let’s connect them.” 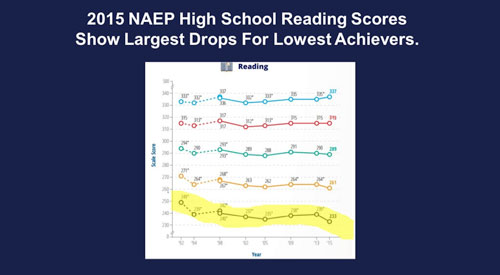 As I noted in my remarks, I am grateful “for the opportunity to speak with you about the science of dyslexia and share with you the tremendous scientific progress that has been made in dyslexia and its important implications for education.” I also noted that “Our nation is in the midst of a national nightmare where substantial numbers of children are not learning to read, especially boys and girls from disadvantaged families.” Illustrated by the graph above of the most recent NAEP data (2015) showing “the lowest achievers show large declines in reading and most alarming, the greatest drop in reading in two decades occurs between 2013 and 2015. Reactions from experts: “We’re stalled…,” “We’re not making any progress,” “We need something substantially different…,” I noted that “increasing scientific evidence points to dyslexia as the explanation and potential solution to our education crisis.” and that “dyslexia puts all the pieces together.” In addition to noting the remarkable scientific advances in dyslexia and the evidence that the achievement gap in reading is already present in first grade and the unexpected nature of dyslexia (you can be quite bright and still struggle to read), my testimony presented three basic principles that needed to be adhered to in aligning education with science: 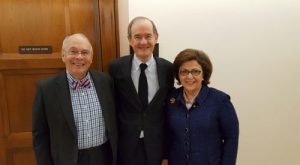 Insightful and compassionate testimony was given by acclaimed attorney and my personal hero, David Boies, who is both brilliant and dyslexic. Boies emphasized that a dyslexic individual can read slowly and be highly intelligent and that there is an urgent need for early screening to identify students who may be at risk for dyslexia and help ensure they receive the help that will allow them to thrive and have happy futures.
Here are excerpts from Boies’ testimony:

“Failing to timely recognize and properly understand and treat dyslexia has three consequences.  First, children fail to get the help and training that can improve their ability to acquire information.  Second, the lack of such help and training causes the child to fall further and further behind.  Third, as the child falls further and further behind, and because the problem is perceived as a lack of intelligence that will follow the child throughout life, the child (and the child’s teachers and families) become discouraged, and too often give up.Recognizing the real issue can enable the child to receive the help needed to improve reading skills ….  Even more important, it enables everyone to understand that the problem is largely temporary; success in life depends on judgment, intelligence, integrity, and commitment — not on how fast a person reads.”

“Dyslexia is not an indication of, and need not affect, the ability of a person to succeed in life.  There are many well-known examples, and many, many more unknown examples, of people with dyslexia who are highly effective, productive, successful, members of society.  Success in life is not a function of how fast a person can read.”

Well said and advice to be listened to and acted upon with a strong sense of urgency.

The bipartisan conversation and education continued into dinner. See additional photos below…