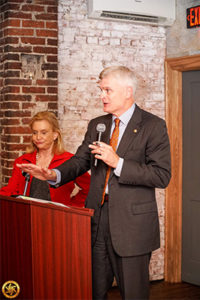 Something remarkable recently happened in Washington, D.C. On October 4, 2017, members of Congress from both sides of the political aisle found an issue they could agree on – early screening, identification and support for children with dyslexia.

At an event sponsored by the Yale Center for Dyslexia & Creativity – “Overcoming Dyslexia: What it Takes to Succeed” – several Congressional members spoke about the need for action. “This is an issue which is not partisan,” said Senator Bill Cassidy (R-LA). “This is an issue about children and there is unity about what we can do that is positive and will help all of them succeed.”

The event was held at Ghibellina restaurant in Washington, D.C., owned by Ari Gejdenson, one of several successful dyslexics who spoke. Dr. Sally Shaywitz opened the evening by passionately telling a diverse audience of educators, Congressional staff and advocates that the event was part of YCDC’s ongoing “bipartisan, cooperative efforts to bring together parents, legislators and educators so that they fully understand and support dyslexia.” She noted that we have strong scientific knowledge of dyslexia but that we fail to act on that knowledge. “Rather than a knowledge gap, in the case of dyslexia we have an action gap.” 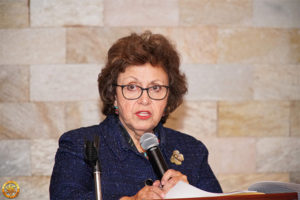 We at the Yale Center, together with the attendees, were very gratified that the event had an unusual sense of unity, purpose, passion and, yes, even warmth. Several of the attendees noted and thanked Dr. Sally Shaywitz for her educating them about dyslexia and helping someone they cared about navigate a positive pathway toward overcoming their dyslexia.

Other speakers included Representatives Carolyn Maloney (D-NY), Phil Roe (R-TN), Dutch Ruppersberger III (D-MD) and Bruce Westerman (R-AR). Representative Larry Bucshon (R-IN) was represented by his wife, Kathryn Bucshon, M.D., who spoke passionately about her own dyslexia, as well as their daughter’s, who is now a freshman at Cornell University.

All the Congressional Representatives said they wanted to work together to ensure children with dyslexia get the help they need. Rep. Maloney, a New York Democrat, said she supported efforts by Sen. Cassidy, a Louisiana Republican, to ensure dyslexia screening is provided in public schools. “It is a cause I would join him in working on in Congress,” she added.

A White House proclamation signed by President Trump was also released at the event. It states: “During National Dyslexia Awareness Month, we renew our efforts to support people with dyslexia and commit to gaining a deeper understanding of the disability.” The proclamation encourages Americans to “learn more about dyslexia and to raise awareness of this disorder. Together, we will ensure that every person suffering from dyslexia reaches his or her full potential and has the opportunity to pursue the American Dream.”

Other speakers, including Yale undergraduate and School of Management alum, Nate Hundt, who is also dyslexic, echoed those sentiments and shared their personal stories of overcoming dyslexia.

Economist Diane Swonk said that despite the challenges, having dyslexia helped her become the person she is today. But she added that too many dyslexics who aren’t identified and don’t receive help are “left on the sidelines. We can’t afford as a nation to have any of our human capital not invested in or tapped.”

“It is all about early detection, just like any illness out there,” said Dr. Tyler Lucas, who overcame dyslexia to become Chief of Orthopedic Surgery at Metropolitan Hospital in New York. He noted that he was able to send his own dyslexic daughter to The Windward School, an independent school exclusively for students with dyslexia, but that most dyslexic kids don’t have that kind of opportunity. “Hopefully with legislation, our public schools will be able to implement programs like those offered at schools like Windward,” he said.

Just such thinking led Dr. Laura Cassidy, wife of Sen. Cassidy, to found the ground-breaking Louisiana Key Academy (LKA), a public charter school for children with dyslexia in Baton Rouge. But she said the broader education system needs to do much more. “If someone tells you that the public-school system works for dyslexics, they are lying to you,” she said, adding that she wants “the community of dyslexia to be as strong as the community of autism.”

Dr. Cassidy introduced Germaine Gordon, who along with her husband Daniel, attended the event on behalf of their dyslexic daughter Auset. Germaine spoke movingly about her daughter’s school experience. Auset attended first grade at LKA before her family moved to Chicago and enrolled her in public school, where her progress in reading and language came to a halt and she started losing ground. Today, the family splits its time between Chicago and Louisiana, allowing Auset, who is now in third grade and dreams of becoming a doctor, to once again attend LKA. When the family must be in Chicago, Auset attends school virtually at LKA, working one-on-one with a teacher there. 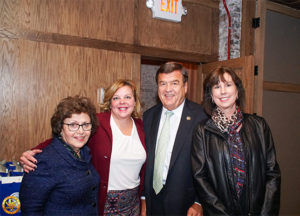 All the speakers were united in emphasizing that raising awareness about what it means to be dyslexic is critical. For Ari Gejdenson, founder and president of Mindful Restaurant Group in Washington, DC., that means recognizing that those with dyslexia are as intelligent, if not more so, than anyone else. Gejdenson said that while tasks like filling out forms may be challenging for him, “I am able to look at an abandoned street and tell you what type of restaurant or bar should go there.” Gejdenson has done exactly that, founding and operating at least eight highly successful restaurants in Washington, D.C.