One of the world’s preeminent polar explorers, Ann Bancroft has received numerous awards for her accomplishments and public service. She helps women and girls throughout the world pursue their dreams through grants provided by the Ann Bancroft Foundation and, through Bancroft Arnesen Explore, offers educational curricula aimed at inspiring young people to achieve their individual goals and fulfill their personal potential. A former special education teacher, Bancroft is an instructor for Wilderness Inquiry, which provides outdoor adventures for disabled and able-bodied individuals. She is also a spokesperson for organizations including Wilderness Inquiry, the Learning Disabilities Association, and Girl Scouts of the U.S.A. 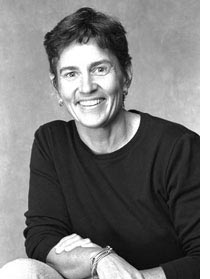 Ann Bancroft’s life is distinguished by the number of firsts she has achieved. In 1986, she became the first woman in history to cross the ice to the North Pole, traveling 1,000 miles by dogsled from Canada’s Northwest Territories. In 1992–93, she headed an all-woman team to the South Pole, becoming the first female to cross the ice to both the North and South Poles. Bancroft also led the first American women’s team to transit Greenland, and teamed up with Norwegian explorer Liv Arnesen to become the first two women to sail and ski across the Antarctic landmass.

Bancroft believes that the more experiences a person has, the better equipped he or she is to handle whatever challenges life presents. Among her own formative experiences, as a young girl in rural Minnesota, were frequent camping and canoe trips with her parents and siblings. By age eight, she was organizing her own mini-adventures—winter campouts in neighboring backyards with cousins and friends. “For someone who was struggling in school, as I was, the natural world was a perfect place to feel at home and express myself,” she says.

Bancroft’s difficulties in school ran the gamut from reading and spelling to mathematics, but she managed to get by with help from her parents and tutors. After she completed fourth grade, a whole new set of experiences awaited her. Inspired by the Kennedy era of public service and the formation of the Peace Corps, her father quit his job and moved the family to Kenya, where he volunteered as a social worker for two years. “It was unheard of to do something like that then,” says Bancroft. “People told my parents they shouldn’t take four little American kids to the ‘Dark Continent,’ but it was absolutely fabulous. Kenya was a young democracy at the time and it was very safe.” The family lived in the country, much as they did in Minnesota, and the children attended the local public school, while their mother taught English and secretarial skills to college-aged women to prepare them for employment in growing cities like Nairobi.

Bancroft describes the two years she spent in Kenya as “a grand adventure that shaped the lives of our entire family. I was at a perfect age,” she says. “I was the second oldest, and when you’re in the fifth and sixth grade, you remember things, people, places, and smells, but at the same time, you’re not too old to go bounding into the bush.”

After returning to Minnesota, Bancroft entered seventh grade in a private school that was academically challenging and on the cutting edge, in terms of recognizing and addressing learning differences. Her learning problems continued, but she thought that if she worked hard enough, she could keep them a secret or they would go away. But that was not to be. Seeing the gap between the enormous effort Bancroft put into her schoolwork and her lackluster performance, two of her teachers suggested that she be tested for dyslexia. When she was diagnosed with the disorder, her parents were relieved to know that it had nothing to do with intelligence or a lack thereof, but Bancroft had the opposite reaction. “It felt horrible to me,” she says. “In seventh grade, you just want to be the same as everyone else; you don’t want to be different.”

It was the late 1960s, and special education was not yet available. Although Bancroft received constant tutoring and attended summer school each year, she continued to fall behind. Even worse, she was being pulled out of activities like art, music, and sports in order to get extra help in academics. “Those were the lifeblood things that kept me going, and they were always yanked from me,” she says. “They didn’t know that art is a fantastic environment for kids with learning problems, and if I had an outlet like recess, the shy, sort of insecure person I was could flourish and make friends.”

By the end of tenth grade, Bancroft’s school gave her the option of repeating a year or staying on grade level and graduating without a diploma, neither of which her parents would accept. So she transferred to a new school where she was able to take part in all the activities she loved and felt a renewed sense of confidence in herself and her abilities.

Although her grades were not the best, she graduated from high school and was accepted at the University of Oregon. She completed the course work for an education degree but lacked the required grade-point average for her practicum work, so Bancroft’s advisor told her to discontinue playing sports, which she considered a distraction. Bancroft refused, saying that what she learned on the athletic field was important to the way she would teach students. “Physical activity was where I made friends and how I could break through my shell and be who I was,” she says. “It was what kept me alive and where I excelled, for I wasn’t excelling in the classroom.” 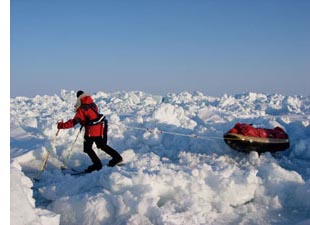 A recommendation from her high school coach allowed her to continue her athletic activities and successfully finish her practicum work teaching physically and mentally challenged students. Bancroft then began her career as a special education teacher and taught for four years before receiving an opportunity to pursue a childhood dream of going to the North Pole.

“After being the first woman on top of the world, my life was turned upside down,” she says. “I just wasn’t ready to go back into the classroom, and I began to think of other dream trips I wanted to take and how to intersect them with kids.” That’s when she decided to establish the Bancroft Foundation, “to give girls an opportunity to explore their potential and find their place in the world.” The foundation offers two granting programs. Dare to Dream, for girls from age ten to tenth grade, is designed to give a girl an experience that might transform her, whether it be a language camp, a dance class, or another activity. “We look for girls who have heard a lot of no’s in their short lives and don’t feel good about themselves, and when they choose an activity to pursue, we give them a mentor.” Bancroft says that when the girls report on their experiences, they frequently say, “I made a friend, an adult other than a family member, who listened to me.”

The other program the foundation offers is Let Me Play, for girls six years of age to tenth grade. It provides sports- or fitness-related grants that can be used for equipment, entry fees, or other related expenses. Bancroft says that girls benefit from engaging in physical activities at an early age, and that many programs exist for at-risk girls and those who excel at sports, but not for that “silent group,” which this targets.

In addition to her explorations and foundation work, Bancroft is a sought-after speaker who shares her tales of adventure with others, to inspire them to follow their own individual dreams. While once she concealed her dyslexia, Bancroft now speaks often about it and maintains an open dialogue with dyslexic children and their parents. They often ask if she would change anything about her life if given the opportunity, and her answer is always the same. “I don’t know anyone with dyslexia who would change,” she says. “It’s been a great asset. My dyslexia and my challenges through school were the absolute perfect training for an expedition. Expedition people are all about one step in front of the other and not going very fast, just doing the hard work. What better way to get the work ethic than by having a learning difference?”

Jack Horner turned a childhood passion for fossil hunting into a career as a world-renowned paleontologist.  During the mid-1970s, Horner and a colleague discovered in Montana the first dinosaur eggs and embryos ever found in the Western Hemisphere.