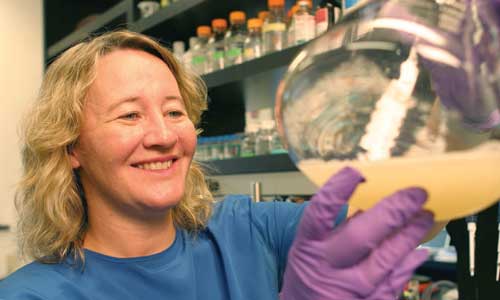 Dr. Carol Greider is one of the three winners of the 2009 Nobel Prize in Physiology or Medicine, joining just eleven other women in winning the Prize since its inception in 1901. Greider has never seen her gender as an obstacle; but in her early years of schooling, as well as in graduate school admissions, there was one obstacle to overcome: her dyslexia.

“When I was in elementary school I was considered a poor speller and somebody who couldn’t sound out words, so I was taken into remedial classes,” recalls Greider. “I remember having a tutor come down and take me out of class and bring me to a different room. It certainly felt like I wasn’t as good as the other kids.”

Dyslexia was also evident in her spoken language, and the wrong words came out in place of the words she meant to say. But school did get better. “I found ways to overcome any difficulties that I had. I would memorize words and how they were spelled rather than try to sound them out. So, I feel as though that taught me that if I want to do something, I just put blinders on and I go forward and I do it. Some of the ways that I overcame my struggles in school helped me later on to be able to focus.”

In many respects, dyslexia also has been a positive attribute in Greider’s research. “I believe that learning to develop my compensatory skills also played a role in my success as a scientist because one has to intuit many different things that are going on at the same time and apply those to a particular problem” to not just concentrate on one of them, but to bring many in laterally. Perhaps my ability to pull more information out of context and to put together different ideas may have been affected by what I learned to do from dyslexia.”

Both of Dr. Greider’s parents were also scientists, and while she never set out to make science her career, she knew what interested her. In college, she studied biology. “It was a time where I learned that I really loved science,” says Greider. “I wasn’t exactly sure what I wanted to do. I think I basically focused so much in my earlier education on just getting through and being able to do all the courses and get good grades that I wasn’t so much centered on, ” What do I want to do in the future?’ And so, in college, I was able to get into a laboratory. I had a mentor who told me the most important thing in biology is to be able to be in a lab and see what it’s like doing research. It was that experience in the laboratory then that made me decide to go on to graduate school.”

But getting into graduate school wasn’t as easy as just deciding to go. Most of the schools she applied to rejected her based solely on her poor GRE scores. “The GREs were probably where I would say I suffered the most in terms of not having as many options available to me because of those standardized tests,” Greider says. “So, there was this discrepancy. My grades were very good, but the test scores reflected something significantly worse than what my grades represented. And so I caused a conundrum for the people who were evaluating my portfolio, and unfortunately in many situations, they use a standard cutoff, with any given numerical for the grades, plus a numerical for the standardized testing, and if you don’t make the cutoff, then you’re not even considered.”

Indeed, out of the thirteen schools to which she applied, only two” Cal Tech and U.C. Berkeley” looked beyond the GRE scores, to her excellent grades, credentials, and passion, and invited her to interview for their programs. They both accepted her, but Carol chose to go to the Berkeley program to work with Elizabeth Blackburn, who would become her mentor. Blackburn introduced her to working with telomeres, and on Christmas Day, 1984, Greider, then a graduate student, went in to check on their experiment, and made the groundbreaking discovery that would ultimately be honored with the Nobel Prize. Greider explains, “This was work that I had done initially as a graduate student at U.C. Berkeley with Liz Blackburn, where we discovered an enzyme” that’s a little machine inside the cell” called telomerase which allows the ends of the chromosomes” the telomeres” to be maintained. So this is work that was done twenty-five years ago; but in the intervening years, we and many other people have done research that shows the medical relevance of that initial discovery.”

Reflecting on her journey through standardized tests, the school selection process, and overcoming dyslexia’s challenges, Greider shares that, “If U.C. Berkeley had done the same thing that many of the other schools did, which was to apply a cutoff, then I wouldn’t have gone to graduate school and made the discovery of telomerase and won the Nobel Prize.” Dr. Greider and her colleagues continue to study telomeres at her lab at Johns Hopkins. “Carol’s profoundly important work, its impact on science and its increasing implications for human health exemplify the Johns Hopkins mission in advancing knowledge for the sake of our world,” says Edward D. Miller, M.D., Dean and CEO of Johns Hopkins Medicine.
Written by Kathy Crockett