“For as long as I can remember, I have been driven by this need to prove over and over again that I am not as thick as I was made to feel at school….I had the idea that everyone was better than me… .  I am still ashamed I can’t recite the alphabet beyond the letter ‘P.’… ”

The roar of the engines and frenetic energy of the pit would never drown out the echoes of his nasty, ignorant teachers.  Shame is learned.  And it seems to be the only thing young Jackie picked up in school.  It started the first time he was asked to read.  He was only nine and it would forever burn in his mind as torture.  He stared down at the page, begging it to make sense, but all he saw was “a jungle of letters, impossible letters.”  His blushing gave way to the sting of unwelcome tears as his classmates started to snicker.  He couldn’t find a single word, but the teacher found hers, and loudly: “Stop playing the fool, Stewart.  You’re a lazy boy.  Get back to your desk!”

By the time Jackie sat down, his classmates were howling.  Until that moment, Stewart had been a “wee boy with a twinkle in his eye,” happily growing up in small-town Scotland.  After, he would become a kid so deeply scarred and despondent he would spend the bulk of his life afraid people would discover he was dumb.  “I cannot exaggerate the pain and humiliation I felt that day.  This pitiless torture was repeated every time I had to read in front of a class.  I couldn’t do it and I didn’t understand why.  Everyone was saying I was dumb, stupid and thick, and in the absence of another explanation, I started to believe they must be right.”

There would be no kind understanding for young Mr. Stewart.  The teachers’ bleak judgments spread to the playground, where he was ostracized by classmates.  Even his parents wrote him off as a disappointing student and son.  He developed an “inferiority complex,” and his difficulties at school were made worse by disappearing self-esteem.  First he was demoted to the town’s lesser elementary, then downshifted further on the educational track to the lowest possible level, alongside those with no potential.

Jackie Stewart found his entire young life “circumscribed by this so-called lack of intelligence.”  His social set was limited to the kids he could count on to not make a fool of him.  He didn’t date the girl who caught his eye because he felt she was “above” him.  By fifteen he was scraping bottom, dead-ended in the town pool hall.  He dropped out of school quite certain he’d been “consigned to the scrap heap.”

His life was salvaged, oddly enough, by a beating.  Assaulted one night by town toughs at a bus stop, Stewart suffered a broken collarbone, ribs and nose (which he proudly never fixed).  His blackened eyes were opened that night to the fact that his teenaged life was going nowhere.  Even if he really was inadequate, he figured, his future still depended on him.  It was time to get good at something, still his best piece of advice to others with dyslexia:

“Find something you can be the best at.  Anything.  There is always something you can do no matter how small or unusual.  And find other ways of doing things.  It can be a more successful route.  Dyslexics don’t do things “like the clever folk.”  Even in business I have never taken the interstate.  I take the winding rural road instead and see opportunities other people don’t.  And I pay attention to detail.  I am still the President of the Menial Tasks Division.” 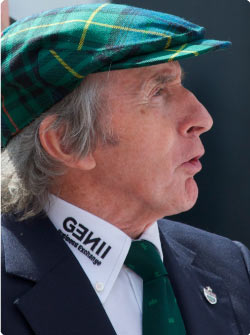 Young Jackie Stewart found himself a place in sport.  Almost at random he picked up a rifle and entered skeet-shooting contests.  He went to work full-time managing his family’s car garage, but on the side he trained hard and competed himself into an Olympic-class sport shooter.  In what would become a future full of stunning championships, this first would be the one he still calls his biggest victory of all—because for the first time in his life he was taking aim at the shame, focusing on something he could do, instead of the things he couldn’t.  Jackie Stewart had finally found something to do he could be proud of.

While competitively shooting, Stewart also managed to buy his first car (before he was old enough to drive it), and use all that attention to detail to make a niche for himself at the Stewart garage maintaining other people’s cars to perfection.  He was twenty-one when he was first recruited to race.  Stewart’s mother was terrified of the track, and would never have given him her permission to race, so he didn’t ask her.  He entered under a pseudonym, A.N. Other.  When that “Other” guy started winning, the truth came out in Stewart’s wedding announcement.  His angry mother refused to speak to Stewart about driving ever again.

The rest of the world, however, was talking about Jackie Stewart behind the wheel very quickly.  He’d become a world champion well before age thirty.  In a sport so dangerous death was the more likely outcome, Stewart would credit his attention to detail and dyslexic overcompensation for his survival and twenty-seven Grand Prix prizes.  People believe, he says, that the high-speed sport is about lightning fast reflexes and rapid fire decisions.  But Stewart attributes his wins to being the most careful guy on the course.  He walked every single one before every single race, always assuming he had to do more than every other driver, making use of his selective photographic memory.

“No, I can’t recite the alphabet, but I know every single gear change and braking distance required to negotiate the 187 corners around the 14.7 miles of the circuit in Germany.  And all that information remains banked in my head to this day.  Now is that stupid or clever?  I may never know.”

But even the exhilaration of winning a Grand Prix was tinged with fear for Stewart.   This fear was not because fiery crashes claimed the lives of his colleagues—he compartmentalized that pain.  The dread that came with a win was because he’d have to stand on the podium while they played “God Save the Queen.”

“I couldn’t sing my own national anthem.  I can’t memorize the words and it is particularly embarrassing when you are standing next to the Queen!  So I devised a method of copying the others’ mouths a millisecond later.  That way I could sing along and no one realized I was reading lips.”

Jackie Stewart would finally receive his own diagnosis of something called dyslexia when he was forty-one years of age.  It was at his son’s Swiss school.  Stewart went for a parent conference and stayed for testing.   He says the diagnosis of dyslexia was like someone extending an arm to a drowning man.  Finally he had an explanation other than stupidity by which to understand himself.  Both his sons would also turn out to have dyslexia, and later, six of his nine grandchildren.  After his career moved on to endorsements, his own race car business, and sportscasting for ABC, the knighted Sir Jackie also became an activist for Dyslexia Scotland.

Sir Jackie has proudly put Scotland at the forefront of education for kids with dyslexia.  Thanks to his group, Dyslexia Scotland, his country is now the first in the world to demand training in learning disabilities as part of all new teacher training.  He finds it ridiculous that systemic change has taken this long, but admits he had to knock some heads together to get the change in Scotland because even in education, “Old dogs just don’t want to learn new tricks. Some people still don’t see the potential in learning-disabled students and would just as soon write them off.”

As for his own life, despite eight honorary doctorates and a professorship, Sir Jackie still calls his own education his biggest loss.  It has been sixty-five years since the first of his many teachers conspired to destroy the fragile confidence of that young Scot who couldn’t read.  And though their bruising humiliation will never completely heal, Sir Jackie Stewart has chosen to use his extraordinary success to shield future generations of young dyslexic Scots from that kind of mean, sadistic ignorance.  For Sir Jackie, it’s a signature achievement in an extraordinary life, even if someone else has to whisper in his ear how to sign it.
by Jane Wallace