Jack Horner dreamed of becoming a paleontologist and of making contributions that would help our understanding of dinosaurs as living creatures. Because of his poor grades Horner knew that achieving this goal by getting a Ph.D. would be close to impossible. However; he held tight to his dreams, and followed his own path to success, and now directs his own research projects and teaches undergraduate and graduate students. His work has been honored with a MacArthur “Genius” Award, and when Steven Spielberg needed an advisor for his Jurassic Park films, he came to Horner.
by Liz Attebery

Jack Horner turned a childhood passion for fossil hunting into a career as a world-renowned paleontologist.  During the mid-1970s, Horner and a colleague discovered in Montana the first dinosaur eggs and embryos ever found in the Western Hemisphere.  Their findings provided the first known evidence of nesting and parental care among dinosaurs.  Horner continues to be on the cutting edge of research on the evolution and ecology of dinosaurs.

In 2016, Horner retired as Regents Professor of Paleontology in the Honors College at Montana State University (MSU) and as the curator of paleontology at the university’s Museum of the Rockies, which is home to one of the largest dinosaur collections in the country and the largest Tyrannosaurus rex collection in the world. After his retirement, the MacMillan Foundation honored his work with a multi-million-dollar endowment for the John R. Horner Curator of Paleontology Chair at the museum. Horner currently is a lecturer and presidential fellow at Chapman University and a research associate at the University of Washington’s Burke Museum. Horner, who holds honorary doctorates from MSU and Pennsylvania State University, was also the recipient of a MacArthur Fellowship, known as a “genius grant.”  The author or co-author of eight books and about 150 professional papers and articles, he has been featured in numerous magazine articles and television specials and served as a technical adviser for the Jurassic Park films, which based one of their main characters on him. 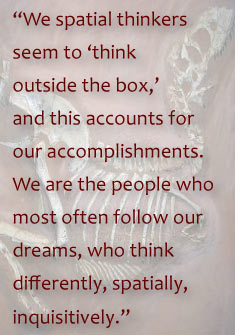 To get to where he is now, Horner had to follow a tough road.  As a boy in Shelby, Montana, he was shy and introverted and played by himself “all the time,” he says.  He describes school as “difficult, because everybody called me dumb, but I knew very early on that I could do things other students couldn’t do.”  A recent article he wrote called “An Intellectual Autobiography” describes his grade-school experiences as “extremely difficult because my progress in reading, writing, and mathematics was excruciatingly slow.”  Horner’s salvation was his fascination with building things and his ability to produce outstanding science projects.  His mother encouraged his projects as a way to boost her son’s confidence by doing what he was good at, and her support translated into award-winning projects at science fairs throughout high school.  Among the projects were a rocket that soared to a height of several thousand feet; a Van de Graff generator; and a tesla coil, for producing high-voltage electric arcs.  His senior project, an exhibit comparing the fossils of Montana with those of Alberta, Canada, took top honors at the state fair and garnered a recommendation from one of the judges, who was also a University of Montana professor, that Horner enroll at his university.  Although he graduated with a D average, all that was required to attend college then was a high school degree, Horner enrolled at the U of M in the fall of 1964 and planned to major in geology.

In 1965, he flunked out of college and was drafted by the Marines to work in reconnaissance in Vietnam.  He served for two years, including 14 months in the area of the demilitarized zone, before returning to his studies at the university.  Though Horner failed five successive quarters, he was fortunate to have the support of an adviser who, he says, “believed I wasn’t lazy or retarded, and he wrote letters of support for my quarterly returns to school.”  During this time, Horner took all the geology and zoology classes that related to paleontology, as well as courses in archaeology and microbiology.  He even studied English, briefly and unsuccessfully.  Horner finally abandoned his quest for a degree and left the university in 1972, believing he was “as good a geologist and paleontologist as any other student at the doctoral level.”  He had also completed a research paper on the geology and paleontology of a stratum in Central Montana containing 300-million-year-old fish and later published three professional papers based on his research.

Despite his academic failures, Horner held tight to his dreams, which he knew he could fulfill if allowed to follow his own path.  “My goal in life was simple: I wanted to be a dinosaur paleontologist and make some kind of contribution to the field of paleontology that would help our understanding of dinosaurs as living creatures.  To accomplish this, I knew I needed a job in a museum, but I also realized that with my college grades and no degree, I might never get such a job.”  While eking out a living driving an 18-wheeler, he applied for work at “every museum in the English-speaking world” and was accepted by three: the Los Angeles County Museum, the Royal Ontario Museum in Toronto, and Princeton University’s Natural History Museum.  “I made my decision not on the basis of rank or pay, but on where I’d rather live,” says Horner.  “I decided that Los Angeles and Toronto were too large for my taste, and that Princeton would be perfect, even though it was the lowest-paying job.”  Working as a technician with the museum director on research projects and exhibitions, he was soon promoted to research assistant and eventually managed his own research projects, with funding from the National Science Foundation.  Horner wrote his own grant applications and was considered a full member of the paleontological research faculty; he just couldn’t sign the applications because he didn’t have a PhD. 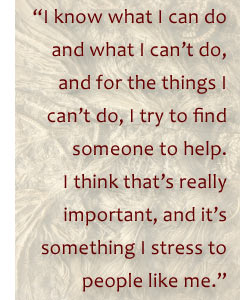 One day during his stint at Princeton, Horner saw a poster offering to evaluate the learning abilities of students who had difficulty reading and memorizing.  He took the required test and was diagnosed with dyslexia.  While the diagnosis didn’t make reading easier for him, he says it did explain why he “would probably never be able to pass even a simple college class, without having extraordinarily long periods of time to read and comprehend.”

“To this day,” he says, “I struggle with the effects of dyslexia.  It takes me a long time to read things, but I take the time that’s required, because if I try to move too quickly, I have no clue what I’m reading.” Because writing is also difficult for him, Horner prefers to have a good co-author do the actual writing and leaves the solid science to himself.  “I know what I can do and what I can’t do, and for the things I can’t do, I try to find someone to help.  I think that’s really important, and it’s something I stress to people like me. “

In 1982, Horner left Princeton for Montana and the world of teaching and curating.  At MSU, which hosts the country’s largest paleontological field program, he teaches two graduate classes in paleontology and two undergraduate honors courses.  One focuses on evolution and the origins of the life and the universe.  The other is a freshman literature class in which students read assigned texts and interpret them using imagination and a variety of mediums.  “I have them dance, sing, play music, however they choose to do it,” says Horner, who says the goal is to encourage students to approach literature in a spatial, image-based way, rather than a linear, word-based one, “in effect, teaching them to think like a dyslexic.  Most spatial thinkers,” he says, “are extremely visual, highly imaginative, and work in three dimensions, none of which have anything to do with time, while linear thinkers generally operate in a two-dimensional world where time is of the utmost importance.  From the perspective of the linear thinkers, we spatial thinkers seem to ‘think outside the box,’ and this accounts for our accomplishments.  We spatial thinkers have known failure our entire lives and have grown up without expectations, not from our teachers, often not from our parents, and sometimes not even from ourselves.  We don’t meet the expectations of linear thinkers and are free to take risks.  We are the people who most often follow our dreams, who think differently, spatially, inquisitively.”

“Personally,” says Horner, “I think dyslexia and the consequences of dyslexia — learning to deal with failure — explain my own success.  From my failures, I’ve learned where I need help, such as in reading and math.  But I’ve also learned from my accomplishments what I’m better at than the linear thinkers.”
Horner also credits his mother and supportive teachers who created “paths” for him by allowing him to work at his own speed and within his spatial parameters, creating science projects instead of reading and writing.  Others created barriers, such as time-based reading and writing assignments, which also helped.  Nevertheless, Horner is not keen on being labeled dyslexic.  “I generally think of ‘us’ as spatial thinkers, and of non-dyslexics as linear thinkers, people who could be described as being dys-spatios,” he wrote in a 2008 article for the International Dyslexia Association.  While both have learning talents and challenges, he believes dyslexia is “an extraordinary characteristic and not something that should be fixed, or cured, or suppressed.  Maybe it’s time for a revolution,” he jokes.  “Take us out of classes for special ed and put us in classes for spatial ed, taught, of course, by spatial thinkers!”

When not teaching or curating, Horner enjoys tinkering with model trains and poking around for fossils.  “I also have a big giant Lego set that I play with a lot,” he says.  “It’s fun and it uses my spatial skills.”

Ann Bancroft’s life is distinguished by the number of firsts she has achieved. In 1986, she became the first woman in history to cross the ice to the North Pole, traveling 1,000 miles by dogsled from Canada’s Northwest Territories.