Philip Schultz is the author of six collections of poetry, numerous works of fiction and non-fiction, and a memoir. He is also the founder and director of The Writers Studio in New York, which is celebrated for its fiction and nonfiction writing programs, and a former director of New York University’s graduate Creative Writing Program. Schultz scored his greatest success, ironically, with Failure, a collection of poems inspired by his father’s misfortunes in business that garnered for him the 2007 Pulitzer Prize for Poetry. 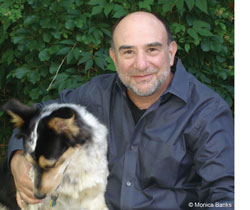 As a young boy in Rochester, New York, Philip Schultz was a terrible student. He was unable to read, couldn’t process what his teacher was saying until long after she had said it, and when he spoke, had difficulty choosing the right words and pronouncing them properly. Schultz also couldn’t tell time or left from right and struggled with basic tasks like tying his shoes. It would be many decades before Schultz learned that he was dyslexic.

Schultz grew up at a time when dyslexia was virtually unknown and “non-learners,” as he described himself, were largely left to function on their own. In his memoir My Dyslexia he recalled one of his early teachers telling him to “‘look at the pictures and just sit there, pretending you’re reading.’ I wanted desperately to be included, to be perceived as being presentable enough to be addressed,” he said. “Being given up on is a very peculiar feeling.” Lying on his bed at night as his mother read to him, Schultz would “try to imagine what it would feel like to be able to read, to be normal.” He would look at the words and pretend to read them, “essentially inventing a boy who was not dyslexic, who was normal. I was creating a narrator capable of rewriting my story with a happy ending,” he said.

Expelled from school in third grade for hitting students who called him stupid, Schultz transferred to a new school, where he was held back a year and received little support from his teachers. While his father struggled to keep his vending-machine business afloat, his mother, a file clerk in a department store, worked with him on his reading every night. She also hired local boys to help with household chores, so that Schultz could focus on his schoolwork. When he was in the fifth grade, a strange thing happened. Asked by his school principal what he wanted to be when he grew up, Schultz said he wanted to be a writer. The principal laughed and asked how he could possibly be a writer when he couldn’t even read. That evening, as his mother sounded out the words of a story she was reading to him, Schultz suddenly broke in and read the rest of the words on his own.

By the time he was in high school, Schultz read well enough to attain B’s and C’s in most subjects and began to exhibit a flair for writing, a skill he said was influenced by his father’s storytelling abilities. He even began to enjoy short stories and novels, despite the extra effort he said it took to “hear the stories over the screen of anxiety the actual process of reading created.” Schultz also drew cartoons for the school newspaper and wrote poems and short stories for the literary magazine. Developing these talents helped him build a sense of self-worth, which was buoyed by his mother’s unwavering belief in him and his ability to make something of himself. Although his parents never mentioned his going to college, he could see from the constant financial struggles they endured that it was essential to get a good education, which he did through his studies at San Francisco State University and the University of Iowa’s prestigious Writers’ Workshop.

Other invaluable ingredients in Schultz’s success as a writer and educator have been determination, a refusal to give up, and an acceptance of the unique creative abilities he possesses as a person with dyslexia, although he has never been officially diagnosed as such. It was not until his son was diagnosed, at age six, that Schultz was able to put a label on his own disability. Like his son, Schultz had struggled with poor handwriting, misnaming items, and low-frustration tolerance for reading and homework assignments involving writing.

Despite his enormous successes and awards, including the 2007 Pulitzer Prize for Poetry, Schultz said that as a child he could not imagine his life ever amounting to anything that others would view “with respect and affection. I didn’t know there was something different about how my brain processed information and language,” he said. “Writing My Dyslexia and understanding that certain things aren’t my fault have really made a difference.” He said that writing the memoir also meant writing about his anxiety, which goes hand and hand with dyslexia, and forgiving himself for the anxiety that reading and writing cause him. “It’s a given, and I just accept it,” he said. “When I want to write and something’s making me anxious, I will tolerate needing to play solitaire on the computer or to walk around the room, knowing that the emotion I’m dealing with will calm down eventually and I’ll be able to write.”

The earlier you get to kids the better,” he said. “It’s very important for kids who struggle in anything to find a direction that will comfort them.

When asked what advice he would give a boy or girl who is struggling with dyslexia and wishing to be normal, Schultz replied: “The fact that their minds work in a way that’s different from others makes them special, and if they could learn to appreciate that, there are real benefits. One of these is learning to be compassionate to themselves and others.” That sense of compassion has also helped Schultz as a writing teacher, for it enables him to see the anxiety his students sometimes suffer and help them overcome it. “The anxiety you’re up against isn’t your fault,” he tells them. “The smarts you need to develop your strengths give you an edge that others don’t have, whether it’s in skating, the arts, or whatever.”

“The earlier you get to kids the better,” he said. “It’s very important for kids who struggle in anything to find a direction that will comfort them. For me, my imagination was a great place to escape from all the anxiety and disapproval in my life. It led me to art and then writing, and that gave me a kind of community, and I suddenly bonded with others who wanted to do that. It’s not surprising,” he said, “that a lot of dyslexics find their way into art and science.”

Drs. Sally and Bennett Shaywitz sat down with Philip Schultz to talk about his dyslexia. Watch the interview here.