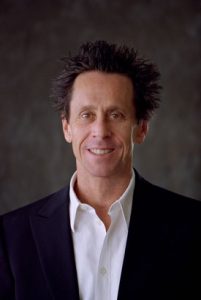 His trademark gel-spiked hair frames a permanently inquisitive face that belies his famously short attention span, a brain that fires like a popcorn popper, and an openly insecure need for attention. According to Grazer, at any given time he is juggling at least ten different movies and shows in various stages of production. His days are over-scheduled, hectic, sometimes exasperating for others, but always fun. If he lets a project hit the ground, it’s because he chose to drop it.

Long before Grazer created this outsized role for himself, little Brian was just a kid on a dull suburban Los Angeles cul du sac who couldn’t read and did his damnedest to deal with it. “In my day there were no words for it, or help. It was just—okay, you’re stupid…. I was always being reprimanded. I was hiding—there was always a show of hands, and mine was never one of them. I would act out in different ways. Sometimes I would trip the kid in front of me. I was mischievous. I was a pretty tough little kid on the playground, and I was pretty proud of the fact that I could beat anybody up. I went after bullies. It made me feel good about myself that I protected somebody. It was all a way to find my way through the embarrassment of not being able to read.”

But small acts of kindness didn’t blunt Brian’s endless worry. He started trying to strategize for the next school day at five. He was desperate to dodge or contain his daily dread.

His parents noticed his burden, but failed to budge it. Brian’s father was “a great guy who was gone a lot.” His mother was determined to “fix” him with the same ineffective tutor five days a week. His actual salvation came in one small powerful package.

“I had a tiny Jewish grandmother, Grandma Sonia Schwartz. She just said, ‘You are going to find your way through this. Think big! Be big!’ She had all of those adages—I was trying to integrate that into my self-worth—it was a little schizophrenic. I mean I thought, don’t you see those report cards? They are all F’s. She did convince me that I was special as much as all the forces of reality were showing me I wasn’t. She was able to overpower me. She gave me an enormous amount of confidence. And any time I could have a success that was a unique success, I felt like Superman.”

Grandma Sonia was more than a loving cheerleader for Brian, she was also his mirror and human Google. “I used to ask her questions constantly. And when I was about five, I asked, ‘What goes faster, a car or a bee?’ And she could have just blown the question off, but she took it seriously. And she answered in the most comprehensive way. She said, ‘Curiosity is going to be your power. You are going to be a special person because you ask really good questions.’ She gave me the confidence to ask questions throughout my entire life. It’s become a very powerful tool. It made me more than a nobody.”

Curiosity wouldn’t just save Grazer’s life, it would make Grazer’s life. But first he had to survive school. He was decent at sports, until his friends grew and Brian didn’t. The day he was cut from junior varsity football in front of the whole team left a searing scar. However, trauma plus time in Grazer’s world can fill a screen.

“Boys at 16, 17, 18 are so vulnerable that any little thing can have a gigantic effect on one’s psyche. It can completely destabilize and impair them. That moment in football, for me, was the most disempowering moment of my life…. And it kind of led me into the klutzy character in Parenthood [the movie] and wanting to make Friday Night Lights.”

Then Brian discovered that the swim team got kids out of first period class. He joined the team and entered his first citywide meet (in the slow, outside lane to be exact). By the last lap of the race, he felt so alone he was certain the competition had toweled off and left. He was overjoyed to be wrong. He’d nailed it, setting a new city record.

“It was unbelievable. I was a natural. The images are indelible in my mind. Coach Wiley and the stopwatch. They were calling me the Great Grazer. That supercharged me. It empowered me in class even though I wasn’t really getting the grades. It’s so much about identity.”

The pool helped, but it didn’t decode paragraphs. In high school he kept working any angle he could figure—including the ricochet shot to a better student’s exam. “I would get the occasional B. How? I was resourceful,” he laughs. “I had very good eyesight and could look over shoulders and find my way through it. I would actually look at other people’s tests because I just couldn’t read it. Or I could read it, but it was so hard it was remedial at best… I am trying to get around the word cheating, here, but there are just so many times I can get around it.”

With a lousy high school record, somehow Grazer talked his way into the University of Southern California. At last, in college, he figured out “how to study,” and that he had a gift for discerning the “big picture” in his classes. He also gamed the system and spent his energy arguing his grades with his professors. He made A’s for the first time in his life, with one exception. Brian still had trouble talking in front of a group, so he signed on for a speech course. This professor would get a call from Grazer years later (after Grazer had successfully addressed a television audience of a billion people).

“The class was really hard. The teacher pulled me aside, in a class of 250 kids, put his arm around me, and recommended that I drop out of college and go to vocational school…. He was literally the only person, once I won an Oscar, I made a point to get a hold of,” says Grazer with wry laughter. “I let the football coach go, but I couldn’t let the speech teacher go.”

“Overcoming obstacles is in itself an art form. So if the movies I make have a single theme, it is how to leverage your limits into success.”

This self-diagnosed dyslexic made it out of college, but realized he hadn’t learned all that much and has gone down a path to absorb as much knowledge as he can. In his new book, A Curious Mind: The Secret to a Bigger Life, Grazer writes that it was then that he launched the first of what would become his “Curiosity Talks.” He reaches out to people for one-on-one conversations with those in all fields the world over—royalty, politicians, Nobel laureates and scientists—to seek out their expertise and acquire the essence of what makes that person a genius. It took Grazer a year after graduation just to get time alone with his best professor to speak with him for one of his talks. Grazer writes that he learned more in those 90 minutes than he had in the previous four years.

His Hollywood career derived from more shallow curiosity—eavesdropping. Grazer had “sentenced” himself to a future of lawyering (following blindly in his father’s footsteps). But he happened to overhear two guys talking outside his apartment window about an open “cushy” job in Warner Brothers’ legal department. By the next afternoon Brian Grazer had that gig sewn up. It was a simple three-month stint on a mail cart. It would take Warner Brothers a year to realize their mailroom kid had turned that tedium into his own personal entertainment industry tutorial.

Grazer used it to hustle his way into the closed community of Hollywood. He called a new person every day and insisted on delivering all of the “humdrum” papers in person, striking up conversations with the recipients. Whether it was an agent, director, star or producer, Grazer discovered that accomplished people liked to talk about themselves to an interested listener. And he was interested in everything about how Hollywood worked.

“I’ve always felt like ideas come from all corners of my brain, and I’ve felt that way since I was a kid.”

Brian Grazer would introduce himself to future partner Ron Howard while working on the Paramount lot. It was a Grazer goal: meet a new person every day. Neither man had any solid reason to believe in the other, yet hundreds of rejections later, Grazer convinced Disney Studios to finance a farfetched-sounding mermaid movie. Grazer and Howard made Splash. It was a hit. Grazer’s screenplay was nominated for an Oscar. He was 30, and he’d finally found himself a professional home.

“Here was a world where good ideas had real value. If it was an interesting idea, no one cared where it came from at all. It was an epiphany. That’s how my brain worked—lots of ideas, just not organized like the periodic table…. I had struggled for years in school…with that binary way of learning—either you know the answer or you don’t—and it didn’t fit my brain and didn’t appeal to me. I’ve always felt like ideas come from all corners of my brain, and I’ve felt that way since I was a kid.”

Brian Grazer’s 33-year partnership with Ron Howard has become the most enduring in his life. Grazer is engaged to be married for the fourth time; he has four children.

Reading is still tiring, but it isn’t hard for him to make out Imagine Entertainment’s long roll of credits. They’ve had their duds—nobody wept when Cowboys and Aliens left the theaters in a hurry. But mostly, Imagine produces success. Though public tastes change, stars come and go, and the mediums themselves are shifting, there are some things Grazer says his movies have in common: “They are all about developing character, discovering flaws and strengths, and overcoming your emotional injuries to become a full person…. Overcoming obstacles is in itself an art form. So if the movies I make have a single theme, it is how to leverage your limits into success.”