A longtime advocate for children and the disabled, Justice Anne Burke has worked to improve the lives of young people with disabilities as a teacher, attorney, and founder of the Chicago Special Olympics, now the International Special Olympics. As a Special Counsel for Child Welfare Services in Illinois, she initiated reforms to the juvenile justice system that increased cooperation among law enforcement and social service agencies and strengthened child protection services. She is also a former Illinois appellate court judge and special counsel for child welfare services, an attorney and a teacher. 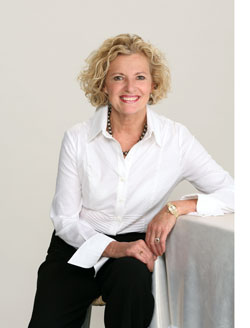 Anne Burke grew up on the South Side of Chicago, the youngest of four children and a self-described C student who struggled with reading, writing, and mathematics throughout grammar and high school. Despite her difficulty, she never thought to complain about her poor academic performance. “I wasn’t depressed about anything,” she says. “It was hard to study, but I just figured that ‘s the way I am—I’m just not a real good student.

“I was lucky because nobody really hounded me about academics; nobody said ‘you’ve got to get A’s or whatever.’ Neither of my parents went to high school, so it wasn’t a big deal,” says Burke. “They encouraged me in areas in which I was really good, like sports, and they also urged me to try other activities, whereas parents today, if a student has academic issues, say, ‘Oh, no, you’ve got to do better.’ But sometimes you just can’t do better unless someone trains you the way you can be trained.”

Burke says she “grew up in the Park District program in Chicago, participating in everything from beanbags to track and field, basketball, swimming, baton lessons, and tap lessons.” A star athlete at Chicago’s Maria High School, she also performed in dance and theatre productions and ran the student campaign for John Kennedy’s presidential bid. During her sophomore year, her adviser asked her what she wanted to do with her life. “I told her I liked sports, tap dance and working with kids, and that I had worked as a camp counselor in the summers. She said I should be a gym teacher, and that was the first time I had ever thought about that.”

Burke’s adviser worked with her to improve her reading skills and helped her gain admission—and a one-year scholarship—to George Williams College in Chicago. “It was 1962,” says Burke, “and that college provided most of the physical education teachers and social workers for the YMCA throughout the country. “I was a Park kid, so everyone knew me and my capabilities.”

During her freshman year of college, Burke made a startling discovery while participating in a professor’s research project on hypnosis. She and her classmates, while under hypnosis, were told to write down their names and ages at various times in their lives. “We first wrote our names and the number 18, then we wrote our names and 15 and kept going until we were five years old. I wrote my name and the number 5, but I realized I had written my name backwards. Then it flashed back to me, all the things that had happened when I was in school. It took me forever to learn to read. I had to read everything two or three times, and when I was writing, it was almost like painting a picture. I’m kind of artistic, and I always liked drawing my name in different ways. But now I remembered the nuns telling me constantly, ‘You can’t write right to left; you have to write left to right,’ and they taught me to read that way, too. There was no special education then, and nobody said I had dyslexia. There was nothing even called that. If you had issues as I did, it was thought that you had a perceptual handicap, that you were perceiving things differently in your mind.”

At the end of her freshman year, the college moved to a western suburb and Burke had to drop out because she had no car and also needed to work. Having taught physical education as part of her college program, she was able to pass the civil-service exam to become a full-time teacher. Her work teaching children with mental disabilities and her involvement in organizations dedicated to helping youngsters with special needs led Burke to establish the Chicago Special Olympics in 1968. She later helped to expand the program into the International Special Olympics.

Burke and her husband, the alderman for Chicago’s 14th Ward, are licensed foster parents who have five children, only one of whom is their biological child. When three of the children were young, she left her job, intending to return when they were older. But she went back to college instead, graduating from DePaul University in 1976 with a degree in education. “My husband made me go back,” she says. “I was satisfied that when I went back to work, I’d go back to the Park District, but he’d say, ‘How are you going to work from noon ’til 10 o’clock at night with three kids at home? You have to get your degree and teaching certificate.'”

Four years later, Burke’s husband encouraged her to go to law school, saying she could do more for children with disabilities as an attorney than she could through direct service. So without telling him, and without receiving accommodations on the test, she took the LSAT and scored well enough to be accepted by several law schools. “With four children under ten, I literally went underground for three years while my husband was Mr. Mom,” says Burke. She graduated from the Chicago-Kent School of Law in 1983 and opened a neighborhood law practice focusing on cases of child abuse, neglect, and delinquency, as well as parental custody issues.

Reflecting on her learning difficulties, Burke says that while she still has to count on her fingers, she can give and follow verbal directions quite well. She is also a strong reader and found the reading she had to do as a law student fascinating. “Reading law cases,” she says, “is like reading stories or novels. It was interesting to read what people did to each other and try to apply that to contract law. There was always a challenge, but it was about real people, and I’m a people person, so I really enjoyed it. It’s when I have to read something and absorb it and put it back down on paper that I have a hard time. Getting thoughts from my brain to paper is really difficult.” When delivering speeches, Burke prepares her remarks in advance and often reads from a text prepared by her speechwriter. “That way I can focus on organizing what I need to say.”

Burke remains positive about her experiences with dyslexia, despite her struggles in school. She advises parents to “be open to listening to what your children can do and encourage them to experiment, to try all kinds of things. Who would have thought that all those experiences with the Park District would help me in a court of law? I think everything you do is a foundation. I never would be here if I hadn’t had all those experiences I had. There’s no question about that.”