A born salesman and entrepreneur, Patrick Whaley talks fast and thinks faster. He credits his dyslexia with packing some of the power behind his considerable drive. 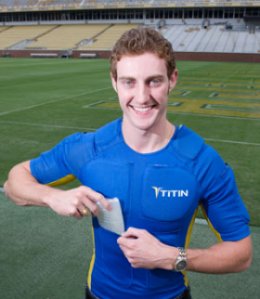 At only 27, Patrick Whaley is sitting on an enterprise of his own invention—gel-weighted, contoured clothing for athletes looking to build strength—an invention that he believes is about to explode.  Whaley appeared on ABC’s Shark Tank on November 3, 2014, fishing for a large cash infusion to grow his business venture.  The Shark Tank reality show is as intimidating as it sounds.  Whaley himself called the Shark Tank “ferocious.”  Each contestant only gets a couple of minutes to lay their vision and budget bare, in search of an investor willing to work with them.  The Sharks are a panel of fierce, opinionated multimillionaire and billionaire tycoons deciding whether to invest their own wallet in any given venture.  Whaley came out a winner.

His win was a rough ride.  The first Shark dismissed him as “bullsh#@t.”   Whaley just kept going.  The second Shark agreed. Whaley didn’t flinch.  Shark three declared disinterest.  With the clock ticking down, Patrick didn’t show his fear.  Finally, Shark number four made an offer, but called Whaley an “arrogant ass.”  Two other Sharks laughed.  Whaley waited.  Then came Shark five, with a surprise second, lesser offer at the last moment.  Whaley had only seconds to make up his mind.  Oddly, Whaley went for the lesser offer.  He chose self-made multi-millionaire Daymond John to be his more-involved investor.  He just had a feeling John understood him better than anyone else.  It wouldn’t be until after the show that both men discovered they shared lifelong struggles with dyslexia. 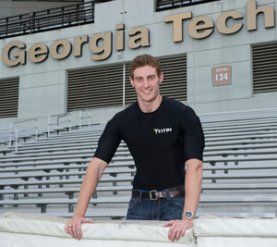 A born salesman and entrepreneur, Patrick Whaley talks fast and thinks faster.  He credits his dyslexia with packing some of the power behind his considerable drive.  Growing up, nobody could figure his inability to read.  He was subjected to “one failed solution after another.”  It started with “massive bulky glasses” when he couldn’t do the alphabet.  All the glasses did was magnify the teasing.  Then it was “try harder,” “trouble maker,” “lacks attention,” and “stupid” labels—with other kids pointing and laughing when he mispronounced a word.  He was already a scrawny redhead.  He didn’t need more bully fodder.At first, he just got hurt, but then he got mad.  “By the time I got to the fifth grade I was fed up with it,” Whaley explained.  “School wasn’t for me.  Opposition has always been a source of fuel and fire.  It gave me incentive to prove them wrong.”

“Don’t give up.  Others have gone through this.  You are not the only one.  With your dyslexia you can analyze things differently.  From a young age I could see there were other solutions that nobody thought could be done.  Never give up.”

Patrick dreamed of being Iron Man, the super genius inventor and superhero, who was misunderstood because he was so far ahead of his time.  He’d started to notice in math and science classes that he got the material so fast that he figured the teachers might actually be dumber than him.  He tried fitting in by loading extra books into his backpack to build up his skinny body for football.  Little did he know that in his attempt was the brewing of an invention; but the backpack training was a bust for his original intentions, and the best he could do was baseball.

Then along came Ms. Bennewitz and a fresh start.  Patrick’s family had moved and he entered sixth grade in a new school.  Ms. B. thought Patrick had many similarities to her own son with dyslexia.  She had Patrick tested.  Bingo.  At first Patrick thought this dyslexia thing was just another bum deal.  The school wanted to put him in a “special class with a bunch of kids who were lazy or clearly disabled in a way that wasn’t me.” 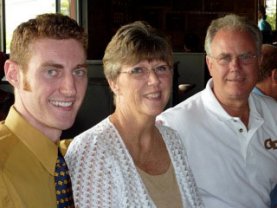 Patrick with his parents on graduation day. Courtesy of Deborah Whaley.

Ms. Bennewitz intervened with individual tutoring.  She taught him strategies for written language.  Patrick, she saw, was masterful at recognizing patterns.  He could stop tripping up on the letters and chunk the words and sentences as wholes.  Patrick stopped taking notes and started listening in class.  He stopped speeding through everything and slowed down to his own pace.

“The rest just started working…. Mrs. Bennewitz gave me confidence in myself, in my own judgment, to latch on to what’s interesting and muscle through the rest of it.  It took me twice as long, but I never gave up.  She gave me huge insight into how my brain operates.”

Whaley found he could memorize the white boards, hear better with his eyes closed, and decode on the computer better than a book.  He stopped learning for the sake of passing tests.  He always knew he was learning inside school for what he would do outside of it.  He was going to be a businessman.  He got through high school on his math and science acumen and his passion for knowledge.  “I love to learn,” Whaley explained.  “Learning is the most fascinating aspect of the human body.  Learning was valuable to me.  I just had to figure out what I wanted to learn… what I needed in the long run.” 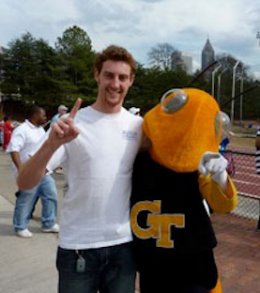 Patrick with the GT mascot. Courtesy of Deborah Whaley.

For starters, he needed to get into Georgia Institute of Technology.  He ignored the frustrated high school teachers urging him to settle for trade school, or a two-year degree.  Once at Georgia Tech, he seized upon an idea he started developing in high school—weighted exercise clothing to help build strength.  He already had the sketches, and so he taught himself to sew by watching videos on YouTube and started stitching prototypes of his TITIN wear while completing college.

The gel-weighted clothing makes people look like well-muscled superheroes.  Whaley has tons of testimonials that they build muscle better than localized weights or compression sweats.  He’s sold them (so far) to athletes and Special Forces for workout gear.  Then he got a call from parents of autistic and ADHD children.  He created some small shirts to replace the weighted vests being used to “center” the children.

“The shirts make them like superheroes.  It feels like an extension of your own muscles.  The problem with the children’s regular vests is that they are bulky and cumbersome, and they kind of isolate the kid.  People start pointing fingers. As a person who is dyslexic, I completely understand…. I want to give back to the kids and let them wear something that makes them feel better about themselves.”

Whaley didn’t get time to say it on Shark Tank, but he’s certain he is alive to serve a larger purpose.  He hasn’t just used his own product as an amateur body builder—it also helped him physically recover after he was shot in the chest during a deadly armed robbery.  Whaley says he survived by a heartbeat.

He is determined to be a part of things that matter.  He is already on the board of the Sage School in Atlanta for kids with dyslexia.  His advice to others with dyslexia is precisely what landed him the deal he was fishing for in the biting Shark Tank.

“Don’t give up.  Others have gone through this.  You are not the only one.  With your dyslexia you can analyze things differently than anyone else.  From a young age I could see there were other solutions that nobody thought could be done. Never give up.”

Patrick Whaley didn’t give up, even when they called him an arrogant ass.  And now with his new half-million dollar investment, and his fellow dyslexic investor, he won’t have to.

Patrick Whaley and his TITIN products were featured on a CNN news segment.  Watch it here to see how his weighted sportswear works.  NOTE – The name of Patrick’s business was changed from OmegaWear to TITIN prior to beginning mass production.