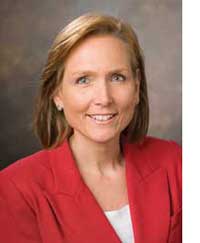 At Yale-New Haven Children’s Hospital Emergency Department, where more than 33,000 children receive emergency care each year, quick thinking and quick action are a must. And it is Children’s Emergency Department Medical Director and Section Chief Dr. Karen Santucci who oversees it all. That she is a fantastic doctor who is at once able to assess a situation, treat the patient, and calm his or her parents shouldn’t come as a huge surprise; but what might is that she is also dyslexic. Although being dyslexic means that she may take a few more minutes to read a letter than another colleague, the only effects of dyslexia in the ER are positive. “Among the things that I learned with this educational struggle were how to really hear, how to really listen. This has served me well in the emergency department, particularly when it’s a fast-paced type of situation,” she says. “I may not be able to read very easily, but when taking care of patients—listening to patients—I can process that information very quickly.”

In addition to processing that information, Dr. Santucci is also interpreting and acting on information to treat her patients rapidly and effectively—as well as making sure that the rest of the children’s ER is doing the same. While most of the staff wear a few hats, Dr. Karen Santucci likely wears a few extra ones. For starters, children’s emergency departments typically have a medical director and a section chief, roles fulfilled by two separate individuals. “I am the medical director and the section chief,” says Dr. Santucci. “So I have those two roles, plus my clinical role in the emergency department and an educational component at the medical school. I also teach residents and fellows. And then there’s the mom role with my two kids.” With each hat, Santucci puts 100% of herself into her life-changing work. “There are amazing things that we strive toward every day at this institution,” she says. “Where else in the world can you walk into a room as a complete stranger and then suddenly become perhaps the most important person in a family’s life at that moment? That’s their baby, whom they love more than anything else, and you’re their venue to making their baby better, and making a diagnosis and recognizing what’s wrong and fixing it for them.”

It may be somewhat her own experiences in learning and living with dyslexia, as well as in part the creative, out-of-the-box-thinking characteristic that many dyslexics share, that allow Santucci to be so passionate and excel in all of her roles, and even manage to find inventive and effective ways to wear multiple hats at once. “Just yesterday, I was doing a tutorial with medical students and the ER was falling apart. I thought, ‘I can’t do both; I can’t do this tutorial and help in the ER.’ And then I thought, ‘Yes, I can,’” Santucci relays. “So I took the students out of the classroom, saying, ‘Come on, guys, let’s do something a little bit different. I introduced them—the three medical students—to three families. I made sure the kids were not terribly sick, that no one was going to die, and I gave the medical students a chart, and said, ‘Start doing a medical history.’ They did the history, and so they did the work of three physicians, even though they were second-year medical students, and I kept bouncing into the rooms just to make sure that we had the appropriate information.”

Especially in the ER, where there is such a short amount of time to gather information and learn about a patient, the ability to observe and utilize the verbal and nonverbal information noted in the exam room is paramount. “Recognizing what someone might be struggling with can change the trajectory of the visit. When patients feel like they’re not alone, it reduces their anxiety level immensely and can improve communication and make the visit much more streamlined in terms of getting to the crux of it,” she says.

That interaction with—and empathy for—her patients and their families, isn’t something that every doctor takes the time to do, but taking that time to gather the secondary story goes a long way in treating the patient’s primary issue. On the day that she brought her medical students into the ER, there was a very anxious ten-year-old child with a small chin laceration. “His mother explained his anxiety, and I said, ‘I hear you, and we’re going to give him something to help relax him. And I’m so glad you told me.’ She was ready for a fight, and started to speak. She paused, and then said, ‘What did you just say?’ I said, ‘I hear you.’” And that moment made all the difference in the world to that family. Knowing the child’s anxiety over getting stitches, Santucci went to work. She applied some numbing medicine, then told the boy, “’‘I’m just cleaning it.’ I put a little drape over it, and sutured him, all while he was saying, ‘You can’t touch it. It’s gonna hurt.’ I said, ‘A—, I hear you. I’m just cleaning it. I’m just wiping it now.’” When the boy asked to go to the bathroom, Dr. Santucci put a Band-Aid on, and the boy turned to his mom to ask, “When are they going to do the stitches?” And she said to him, “She just finished them.” He was stunned.

At certain points in her college and medical school education, there were instances that could have easily deprived the patients, medical students, staff, and others from benefiting from the gifts that Dr. Santucci brings with every hat she dons. Nearing the end of college, her mentor told her that she wouldn’t get into medical school. “I was working really hard. I had a great GPA. I wasn’t one of those people where it just came easily or quickly. I didn’t apply because he said I wouldn’t get in. I went to NYU for a year of graduate school, and then I thought, ‘I never even applied. I worked so hard and I never even applied.’ So I applied to six schools all in New York and I got one interview. And I got into SUNY Downstate.”

That Santucci didn’t give up has to do not only with her tenacity and intelligence—both interpersonal and intellectual—but also with her genuine desire to care for people. “As a physician there’s so much you can do in terms of effecting change in people’s lives on a daily basis. . . That was my major impetus for doing it.”