“I truly believe dyslexia made me the achiever I am in my art, and it made me who I am as a person.” 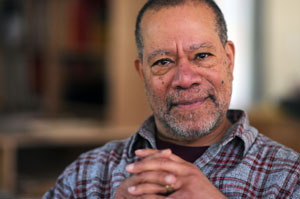 “On the exterior, I was able to draw. I was well liked, dependable, and could make people notice and like me…. But I was working so hard at being okay. I remember the pain and the exhaustion and the amount of energy I spent. I needed the accomplishment and being out front to mask this sense of inadequacy. It was a double life: to be liked, acceptable, and reliable and not look at myself only in terms of my learning disability.”

His realization that his reading was ragged had come on gradually. Words shifted on him. His spelling was “atrocious.” And he instinctively hid how long it took him to comprehend anything in the classroom, a difficulty that often left him completely lost. Daunted by what he couldn’t do, little Jerry leaned on his lines.

It would be forty years before Pinkney ever heard the word dyslexia. His “deficiency” without understanding or a name was “rendered moot”—he was simply saddled with it. Fortunately, little Jerry also had this other “thing,” something special about him that touched people, something that elicited warmth, generosity, and a desire to help. For Pinkney, it’s a puzzle he’d still like to go back and quiz his teachers about.

“I’d like to know why this kid who had his learning challenges was never teased. Why he was encouraged to use what he had. I would like to know what they saw in young Jerry that made him leapfrog over these things. . . . There was always someone tucking me under their arm and making the world feel safe and positive.”

The positive outlook started with his parents. His mother never left him with the feeling that he’d failed, only that he could do better. Part of a big family in a small house, little Jerry was allowed to draw on the wall of his bottom bunk. When “there wasn’t an inch left,” his dad would paint it white to make room for more. His mother read Aesop’s Fables and fairy tales to her six children, and classics to herself. She taught by example that books held wonder. His parents didn’t say much, they didn’t need to. Jerry knew he was supposed to make them proud, perhaps even more than his siblings, because he was “different.”

At school, however slowly he learned, his teachers often appointed him “class artist.” He remembers that young boy was hungry to learn, eager to please, and working double time to figure out any way to do it. “[My drawing], this creative activity, bolstered my self esteem…and I was never a poor student in finding inventive ways to participate in classroom instruction.”

He proudly graduated from grade school with honors.

At only eleven, a precocious Jerry took his first job at the neighborhood newsstand. He was supposed to be hawking the afternoon edition, but he ended up peddling street portraits—paper and pencil in hand. So delighted to draw, at first Jerry forgot to charge his subjects money. He learned quickly outside the classroom. His world was his African-American street in Philadelphia, chockful of character. Instead of dreading trips to the barbershop like many boys, Jerry adored sitting in the chair surrounded by storytelling, in awe of the emotional power of the language he could grasp when it was spoken.

“It took a large amount of energy to navigate each and every day, wondering when the time would come when I would be called upon to write a note or read out loud. Imagine having to constantly find new ways to slip out of those situations.”

Pinkney’s expressive abilities still funneled through the point of his pencil. In high school he kept up the hard work. His drawing only got better. His reading didn’t really budge. There was more not to comprehend, and he still covered for the constant fear of exposure, but he just kept moving. His mysterious mentor magnet also worked its charms. More helpful adults were drawn to him—one science teacher even slipped him the test answers to get his marks up for college. And no matter what, he just knew he was going to “make something of himself.”

But in 1950s’ Philadelphia, an African American “making something of himself” could be a limited proposition. One well-meaning teacher skipped over Pinkney for application to the Philadelphia College of Art (now the University of the Arts)—assuming she was protecting him from automatic rejection as a black student. He went around her, picking up enough applications for himself and all the other African-American art students at his high school. Out of the three scholarship spots the art college gave out that year, Pinkney got one, and number two went to his black best friend.

Young Mr. Pinkney was pummeling the odds. It was 1957; he was black, poor, dyslexic, and enrolled in the Philadelphia College of Art. He surrounded himself there with friends who were both good readers and spellers, he thinks now, as a way of expressing himself vicariously. His art was still so good and his dyslexia still so bad.

“It took a large amount of energy to navigate each and every day, wondering when the time would come when I would be called upon to write a note or read out loud. Imagine having to constantly find new ways to slip out of those situations.” One of those college friends would later become his wife. Gloria Jean Pinkney not only authored children’s books Jerry would later illustrate, she also did all his paperwork—freeing Jerry Pinkney to build an amazing body of work.

Now age 75, Jerry Pinkney has illustrated or created more than one hundred children’s books. If he has any preferred theme, it’s something small that triumphs over something much bigger than itself. He uses some drawing, but mostly Pinkney opts for enveloping watercolor. He prefers painting for children because they have richer imaginations. And he doesn’t patronize them. What starts out as illustration in a children’s book can go on to stand alone in exhibition. Pinkney has had thirty one-man exhibitions all over the world, from Russia to Congo. His work is also part of several prestigious permanent collections. In fact he’s done almost everything— right down to a stamp for the post office.

His pictures tell their own stories, whether they parallel another author’s, his own, a classic, or frame by themselves. And the slightest change of a brush stroke in an owl’s eye, or a rabbit’s foot can redirect the emotion of the whole tale. He has the huge, easy expressive range with lines that he always lacked with spontaneous letters. He is the first African American ever to win the coveted Caldecott Medal for Children’s Literature. That book, The Lion and the Mouse, contains no words at all.

Pinkney has won scores of other honors, acknowledgments and degrees, including four New York Times “Best Illustrated” honors, and five Coretta Scott King awards, all of which are carefully packed away. There is only one prize that actually sits in his studio: the High Achievers Award given to him eleven years ago by the Laboratory School in Washington, D.C., a school for kids with learning disabilities—because Pinkney has always known that however successful he is, his dyslexia remains his lifelong companion.

“A lot of what I do is bouncing off a learning disability. I still want to read better, so when I walk into committees I serve on, like the National Education Association, I go in with my markers and agendas and try to predict ahead how I can contribute. Because I have this other part of me just hanging on by my fingernails, the anxiousness is there. Afterward, the others may want to go for a drink and I am wrung out with exhaustion.”

Jerry Pinkney has spent a prolific lifetime creating art for books that little Jerry could have loved even with his dyslexia. He is always working on a new book, and increasingly produces everything about his books. And, having survived childhood, he can see the gift in his dyslexia.

“The very first markers in life are reading and spelling—so I have achieved in other ways. It’s a gift that I see things differently. I have an understanding about things others don’t have.”

“I truly believe it made me the achiever I am in my art, and it made me who I am as a person. I try to live up to something as an adult. There is certainly a moral code attached to it. It has to do with making something of myself of value. The very first markers in life are reading and spelling—so I have achieved in other ways. It’s a gift that I see things differently. I have an understanding about things others don’t have.”

At 79 years old, he is the legendary artist Jerry Pinkney, now a grown man with a great deal left to do. But he’s figured out three more really important things: that his gift with lines could take him a very long way in life, that, with hard work, he could become an author despite the awful lag with letters, and that it would take both of those things to make him whole.