Like so many other dyslexics, Douglas Merrill is hard to categorize in one particular career field. In addition to being an entrepreneur, he is also an author, computer guru, a social scientist and cognitive scientist.

Douglas Merrill has held top positions in some of the world’s most prestigious companies.  A former chief information officer and vice president of engineering at Google Inc., Merrill oversaw all facets of the company’s internal engineering and technology, managed corporate strategy and business development in the Middle East and Africa, and presided over Google’s initial public offering in 2004.

Merrill has also served as chief operating officer of new music and president of digital business at EMI Music, and as a senior vice president and chief information security officer at Charles Schwab and Company; a visiting professor at Northwestern University’s Institute for the Learning Sciences; and an information scientist at the Rand Corporation, a non-profit research institution dedicated to exploring the most complex problems facing our society today.  He recently added the title of “author” to his résumé with the publication of Getting Organized in the Google Era, a book offering tips on organizing and remembering information in today’s world of information overload.

Merrill’s accomplishments stand in stark contrast to the life he envisioned for himself as a young boy.  Growing up in the Conway, Arkansas, he struggled with reading and mathematics and fought a constant battle to be organized, in an effort to keep up with his seemingly smarter fellow students.  To help prepare him for school each year, Merrill’s mother spent long summer hours at the family’s kitchen table, drilling him in addition, subtraction, and the times tables.  Merrill retains keen memories of himself in those days, a small, skinny boy with pointy hair and thick glasses who felt he wasn’t as smart or as good as his high-achieving parents and siblings and feared becoming an embarrassment to them.

Merrill, who had been deaf from ages three to six as the result of an auditory nerve infection, did not find out until high school that he was dyslexic.  And even then, he received no extra help or compensation for his disability.  But strong family support, combined with his own determination to succeed, enabled him to graduate from high school at 16 and go on to earn a master’s degree and doctorate  in psychology from Princeton University.  Merrill says in his book that the focus of his doctorate was cognitive science, the study of how people learn and solve problems, “because I wanted to figure out how to help that boy — and others like him — stop feeling so scared, sad, and anxious about learning.”

Merrill credits his mother’s influence as one that has had a major impact on his life and career successes.  “I think the times that my mother spent teaching me math, over and over again, is probably the most significant.  However, I also had several professors at college who let me tweak the assignments in odd ways to suit my learning.  For example, I wrote fiction stories to address topics like anomie in sociology, rather than dry papers with loads of references.  The fiction was easier for me to pull together, as I kept getting the footnotes in a traditional paper confused.  I’ve found over the years that solving problems in unusual ways to avoid the dyslexia-induced limitations has been key.”

Reading aloud to an audience, for example, is difficult for Merrill, so when he gives speeches, he never refers to notes.  “I find that too stressful and confusing,” he says.  “The most I’ll use is a few bullets, in huge font, to remind me of what I want to say.  Mostly, I just talk without a script to whatever slides I’m presenting, and my slides are usually pictures that remind me of my point.” 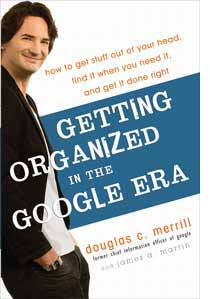 In Getting Organized in the Google Era,  Merrill discusses strategies he has developed for organizing and remembering information.  “Because learning was such a struggle for me, I spent a lot of time thinking about how to get around the limitations my learning challenges posed.  I worked hard to develop techniques and systems to reduce stress on my brain and help me focus only on the information I really needed to learn.” His efforts paid off not only in school, but also in his career.  “I was hired to help Google in its mission to ‘organize the world’s information,’ partly because I’d been practicing to do that very thing, on an admittedly much smaller scale, since first grade.”

Among the conclusions Merrill has drawn from his work and study is that the way much of our world is structured conflicts with the way our brains work, which makes getting organized difficult.  Examples of this, he says, are the typical business workday, which follows a schedule originally created to organize factory workers, and school vacations, which were designed to enable children to work in the fields, despite the evolution of our economy from farming, to factories, to service and information industries.  Compounding the problem is the constant torrent of information vying for our attention from the media, email, social networking, and the like.

“Multitasking adds to the problem,” says Merrill, “for we constantly have to shift from one task to another, thus knocking out what we had in our short-term memory,” which cannot hold more than about nine scraps of information at a time.  “It’s more efficient, Merrill says, “to deal with one task at a time, take a short break, and then do a second task.”  If we want to remember something, he suggests filtering out the essential information we need to achieve a goal, associating that with a story, and “encoding” it in long-term memory.  As a student, Merrill devised a system of color-coding study material, using highlighters to pick out key information, filter out nonessentials, and divide important material into smaller pieces, which were easier to put in context and commit to memory.  “Thanks to this technique, I became a world-class reader, a skill that’s been invaluable to me ever since,” says Merrill.

However, because communication today is so widespread and inexpensive, and knowledge spreads too fast to hold power for long, Merrill says that organizing information so one can access it when needed is more efficient than trying to remember every detail or hunting around in file cabinets to retrieve information we’ve filed there.  “Power,” he says, “used to lie in having information, but today, power lies in effective searching for information.”  Search also reduces stress levels by minimizing strain on our memory and letting our brains work for, rather than against, us.  He also believes in taking advantage of today’s many technological resources, such as fast Internet access, video conferencing, inexpensive online information storage, and other tools, to reduce stress and increase efficiency.

Describing the importance of organization in his own life, Merrill said, in a 2007 interview in Men’s Health, “The whole point for me is to clear my head, in order to be in the moment.  The less stuff that’s rattling around in my brain, the more I can focus on what I’m doing.”

Merrill is currently the CEO of ZestFinance, a financial services technology company he founded which analyzes big data and potential credit variables in order to help the underbanked, or people and businesses with poor credit and restricted access to bank loans and other financial services.  He is also an adviser to numerous companies and nonprofits, and a supporter of animal rescue and drug abuse recovery organizations in Los Angeles, where he makes his home.

Given the extent of his talents and accomplishments, when asked by the YCDC if he considers his dyslexia an asset, rather than a liability, Merrill responded, “My limitations have led me to try and solve problems differently, which has been useful to me in my life.”  He also gets bored easily and relishes a challenge.  “I like to feel that I’m out of my depth, because it forces me to learn and develop.