World-Renowned Radiologist & Expert in Ultrasound of Pregnancy
A pioneer in radiology, particularly fetal ultrasonography, Dr. Benacerraf was among the first physicians to recognize the correlation between Down syndrome and physical signs, including an extra fold of skin on the fetus’s neck, as observed during an ultrasound. She is also the editor-in-chief of the Journal of Ultrasound in Medicine. 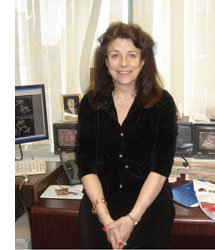 Like many dyslexics, Beryl Benacerraf has a unique way of viewing the world and brings her visual gifts to her work. In many ways, dyslexia has helped Dr. Benacerraf become the doctor she is today. “During residency, I recognized that I had dyslexia. And then I realized I had this gift for imaging,” she recalls. “Radiology is where I belonged. I live in a world of patterns and images and I see things that no one else sees. Anomalies jump out at me like a neon sign.” Perseverance also has a lot to do with Dr. Benacerraf’s contributions and success. “When I first started writing papers about the signs of Down syndrome, people thought I was crazy; I was booed off the stage. ‘Who is this crazy person talking about the neck fold?’ I was denied admittance to radiological societies. I was very controversial for a very long time. But I wanted an academic career and made it for myself,” she says.

Even earlier in her life, Beryl found ways to overcome dyslexia. Because she grew up in France and didn’t come to the United States until the second grade, knowing no English, it was assumed that she had trouble reading because she was multilingual. In high school, she could read to get by, but struggled to read out loud. Spoken language could also be problematic; for example, difficulties retrieving or finding the right words, confusing words that sound alike, and having incorrect words come out although she had intended to say, and knew, the correct words.

At the time, she didn’t know she had dyslexia, but she knew how to compensate: she would count the number of students in front of her and find the paragraph she would be asked to read, and then practice that paragraph over and over until it was her turn. She also knew that she couldn’t pass standardized tests, and so she applied to Barnard College early decision, without taking the SAT. She only took it after she was already admitted. In college, she continued to camouflage her disability. “I took science and math, placed out of foreign languages, and didn’t have to take history. I started to dictate everything and paid other students to type it up,” she says. Phone calls from her father, a Nobel Prize-winning physician, helped get her into medical school.

Yet, there was no doubt that Beryl belonged in medical school. During a medical school clerkship in radiology, a senior radiologist at the Massachusetts General Hospital, Dr. Jack Dreyfus, said to her, “I’ve never seen anybody with your ability in the thirty years that I’ve been practicing.” Just a few months into her residency in surgery, Beryl realized that her gifts were best suited to radiology. She made a phone call to Dr. Dreyfus and, although the program had started and was full, he created a spot for her at Mass General. Dr. Dreyfus seemed to know early on what Beryl’s innate abilities could bring to the field of radiology.

Her contributions to her field and ability to see patterns that no one else sees have benefited countless numbers of people. In her office, Beryl has a bank of screens showing what is going on in each exam room. While on the phone one day, she happened to see a tiny lung mass on a fetus on one of the screens. She brought it to the attention of her colleagues. “I said, ‘Did you see that?’ And they said ‘What lung mass?’ I was hardly paying attention and I noticed it, while the people examining the patient didn’t see it. It’s a pattern recognition that’s incredibly acute,” she explains. “Because of dyslexia, my brain works differently, and I can see these patterns. I do have a gift that other people don’t have, and I will always stay ahead of the crowd and see more in an image than other people. You can’t overcome it; you can work around it and make it work for you, but it never goes away. That’s probably a good thing, because if dyslexia went away, then the other gifts would go away, too.”