As mayor of San Francisco from 2003-2011, the youngest elected to the position in a century, Newsom implemented the Health Choices Plan, providing universal health care for poor and uninsured city residents, and signed one of the country’s first menu-labeling laws, making chain restaurants prominently display nutritional information on their menus.  In 2009, Newsom received the Leadership for Healthy Communities Award, along with New York’s Mayor Michael Bloomberg, for making healthy-food and physical-activity options more accessible to children and families.  In 2013, Newsom published Citizenville, a book about ordinary citizens using technological tools to reshape the government into a modern, digital-based democracy, which reflects his ideas about the necessity of a modernized, innovative government structure. 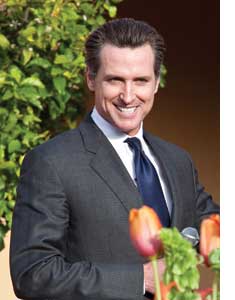 Gavin Newsom was diagnosed with dyslexia at age five, but his mother didn’t tell him, for fear he would use his disability as a crutch. So while he labored to read, spell, and work with numbers, his little sister sailed through school effortlessly. “As an older brother,” he says, “that was more difficult than you can imagine. I was always wondering why she would get done with her homework quickly and I was still struggling to work through it, and why my parents were so demanding with me and so easy on her as it related to academics.”

When Newsom was in fifth grade, he discovered in his mother’s office a stash of papers reporting on his dismal academic performance and describing something called dyslexia. “That really hit home, and it explained why everyone else was running into their parents’ arms after school and I was stuck in that shack behind the school every Monday, Wednesday, and Friday with four or five other students.”

Of all the learning difficulties he endured, Newsom says that reading aloud was “the most humiliating.” He can still recall his fifth-grade classroom and the row he sat in, “with my heart just sinking and pounding, hoping that that period would end and we’d get the hell out of there, and then getting up and starting to read and having everybody in the class laugh. That’s when I basically gave up on any reading. I did book reports by literally reading the back of the book and just copying the text, thinking the teacher would never find out.”

High school was even worse. “The grades were bad, my self-esteem started to collapse, and I remember faking being sick all the time to avoid math class, which I just couldn’t handle.” But because he was expected to attend college, Newsom began to take summer classes to catch up, knowing that he would never get into “a serious university. I took the SAT and it was a complete disaster, and they didn’t even argue for me to take it again, because it was just beyond stressful. And I’ll be honest: had it not been for my mother and some remedial training, I never would have gotten into college.” Thanks to those and his outstanding abilities in baseball, Newsom began to receive scholarship offers from a number of colleges and attended Santa Clara University in California on a partial baseball scholarship.

“Baseball gave me some self-esteem and confidence, and then I found my bliss and my passion in politics,” he says. Newsom declared a major in political science and turned his life around. “All of a sudden I got good grades, because I loved the subject matter. What I found was that there was a contemporary nature to politics, not political theory necessarily, but what was going on in real life, and as difficult as it was to learn about it, I actually cared enough about it to work a little harder. So I started looking at newspapers like textbooks, and to this day, I’ll still underline newspapers because, otherwise, I can read five pages and not remember one thing I read.” Though he has never read a novel, Newsom devours nonfiction and has a library of countless “Cliff’s Note versions” of articles and books he has read on politics and political science. “Because of overcompensation and the things you learn because you’re struggling, I have remarkable retention. In a political frame, there’s no greater gift, because you can really think on your feet.”

After graduating from college, Newsom worked briefly in sales and real estate before achieving success as an entrepreneur. With the support of a family friend and other investors, he formed a company called PlumpJack Associates in 1991. Starting out as a wine shop on Fillmore Street in San Francisco, the business eventually grew to include wineries, restaurants, inns, and retail clothing shops all over California. Newsom attributes his success in business to “a passion, which I decided was the secret of all success—finding that thing that motivated me beyond anything else and, with that, a willingness to fail and try new things.”

Newsom first stepped into the political arena in 1995 as a volunteer for Willie Brown’s mayoral campaign. He later served on a number of boards and commissions, including the San Francisco Board of Supervisors, where his business background was a major asset. From then on, Newsom has earned the respect of colleagues and the public for ignoring political expediency and taking tough stands on such issues as universal health care, chronic homelessness, sexual equality, and sustainability.

When asked to speak to students about his experiences, Newsom is gratified when parents tell him how inspiring it is to their dyslexic children to know he shares their disability and has achieved success, so they can too. The key, he tells students, is to “develop discipline, for when you can apply discipline to a problem in life, you can solve any problem. When you start to learn that, your self-esteem begins to change, and then so does your sense of self and possibility, every aspect of your life, small and large. One of the things you learn with dyslexia,” he says, “is that you’re going to fail often and you’ve got to appreciate that; as they say, failures are a portal of discovery. The secret of success is, as another dyslexic, Winston Churchill, said, ‘moving from failure to failure with enthusiasm.'”