In 2015, Kent Sinclair founded Sinclair Law LLC, a cybersecurity and privacy law firm. Previously, Sinclair worked as a managing director at Stroz Friedberg, LLC, a global consulting and technology firm, which is a leader in data privacy and security, investigations, and risk management for corporations and executives.  Sinclair was an attorney and partner at Seyfarth Shaw, LLP where he focused on representing information technology clients and foreign companies involved in litigation in the United States, and on defending commercial class-action lawsuits.  Earlier in his career Sinclair worked on legal-reform efforts and civil-society development projects in Central and Eastern Europe shortly after the fall of communism.  He also works pro bono to represent local not-for-profit organizations.  Sinclair is a board member of MABIDA, the Massachusetts Branch of the International Dyslexia Association.

A member of the American and International Bar Associations, Kent Sinclair is widely respected for his knowledge of European civil law and his skillful representation of commercial and nonprofit entities in the United States and abroad. His successes, however, belie Sinclair’s early struggles with learning disabilities. “From the moment I first stepped into a classroom, school was a struggle for me,” he says. “I struggled with reading and writing and knew I was different.” But Sinclair also knew he wasn’t stupid, as evidenced by his ability as a six-year-old to hold his own against graduate students of his father, a professor of education at UMass. “I couldn’t read, but I could debate them on the merits of withdrawing from Vietnam,” he says.

When he finished second grade, his school “effectively threw me out,” says Sinclair. He transferred to a “very nurturing” private school in nearby Amherst, Massachusetts. They were also unable to teach him how to read. Things changed in sixth grade, when a new law allowed Sinclair to return to public school and receive special education. “I was something of a test case,” he says. “I’m living proof that special education is a socially efficient mechanism. If I hadn’t gotten that help, I would have been a very different contributor to society and might have even ended up sitting behind bars.”

Sinclair got additional help during the sixth grade after his father heard Dr. Richard Apell, of the Gesell Institute in New Haven, speak about students with above-average intelligence and low reading skills. The Sinclairs brought their son to the institute, where he was diagnosed with dyslexia and began working with Apell every week on breaking words into syllables and studying the relationships between letters. Though Apell at the time thought dyslexia was associated with the eyes, rather than the brain, the sessions dramatically improved Sinclair’s reading abilities. The weekly trips also introduced him to the Yale campus and sparked his interest in a legal career. “I loved Yale, and the only law school I knew was at Yale, so even though I couldn’t read, I wanted to be a lawyer and no one believed I could do it,” says Sinclair. “If you set audacious goals for yourself, don’t listen to people who say you can’t achieve them. Use your own strengths and resources from others to help you.” 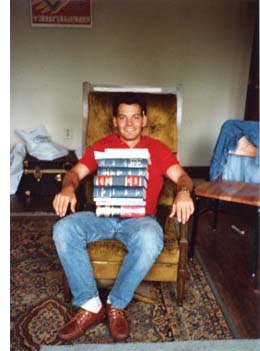 After “pulling all-nighters” to keep up with the workload in junior and senior high school, Sinclair was admitted to Bates College on the strength of his application essay and special circumstances. “If you looked at my grades and SAT scores, I wasn’t someone you’d expect to thrive, but I just ate college up,” he says. Sinclair also flourished at Yale Law School, where his essay on the benefits of being dyslexic played a part in his acceptance. While he still had some difficulties with decoding, Sinclair says “law school wasn’t hard; sixth grade was hard.” He believes colleges and grad schools should actively recruit dyslexic students, for “they can thrive in the right environment.”

Sinclair’s experiences with dyslexia were invaluable in helping his dyslexic daughter, a ninth-grade “budding poet,” get the education she needs to succeed. Diagnosed in first grade, she is a student at the Landmark School in Beverly, Massachusetts, which specializes in teaching students with language-based learning difficulties. Her dyslexia also motivated Sinclair to be more open about his own learning differences and to get involved with the Massachusetts Branch of the International Dyslexia Association, where he strives to help adult dyslexics share their experiences and help each other succeed in their professions.

Litigation attorney Bonnie Patten has successfully defended physicians and health care providers in complex and unique medical claims. Her expertise in health care litigation is so well respected that she has been asked to present at conferences on the subject.