A history-making director, producer, and screenwriter, Roger Ross Williams has already garnered many accolades and awards for his amazing storytelling talents, including the 2010 Academy Award for Best Documentary Short Subject for his film Music by Prudence.  Williams is the first African-American to win an Oscar for directing and producing a film.  His film, God Loves Uganda, premiered at the 2013 Sundance Festival to rave reviews. His latest film, Life, Animated, was nominated for the Academy Award for Best Documentary Feature in 2017.  Before striking out on his own, Williams was a producer of political satire for Comedy Central and Michael Moore´s Emmy Award-winning series TV Nation.  His news credits include NBC Nightly News, MSNBC, The Today Show, ABC News, CNN, and the highly rated Barbara Walters specials for ABC.  He is also the recipient of the NAMIC Vision Award and the National Headliner for Best Human Interest Feature. 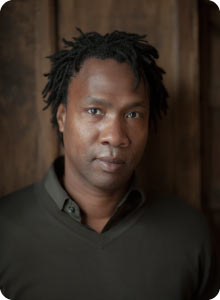 He had no idea where his imaginary life came from, but it appeared early in his young brain and he instinctively believed in it.  Young Roger Ross Williams was a lonely latchkey kid.  His mother was a struggling maid.  They lived in a small, dingy industrial town in Pennsylvania—a town he always knew he’d leave.  Every day after school he’d let himself in, pour his bowl of Cap’n Crunch, and build the houses his stick figure self really belonged in.  Stick figure Roger took jet planes and limousines.  He was admired, important and he thrived in the fancy big cities of the world.  He was everything little Roger was sure he’d be someday, though he kept it to himself.

In real life, Roger, at the tender age of five, was stuck under the knuckle-wrapping rule of aggressive, cruel nuns.  They called him “their little chocolate bar” because he was the only African-American kid at school. He knew he couldn’t read, but he didn’t completely understand why they put him in that “special group” and made him feel retarded. Or why the nuns yelled at him in class and dragged him down the hall by his ears.  It hurt, and it didn’t help him read.  “I just wanted to keep it a secret. I felt marked. I’ve never talked about this ‘til now…. And, of course, there was the moment where the teacher made you stand at the blackboard and write a word or a sentence until you just stood there humiliated in front of the class and you couldn’t do it and the other kids were laughing at you….”

All he learned in those “special classes” was that he didn’t want to be in them and neither did anybody else.

Next, his mom moved him to a white suburban public school.   Although he was relieved to be rid of the nuns, any other hopes Roger had for the new school were rapidly dashed.  He’d just finished the third grade and the suburban school forced him to repeat it.  The nightmare of a never-ending non-education repeated, too.  “Over and over in the same nightmare I was an adult, stuck in the high school.  They trapped me in there and would never let me go….  I was put in the third grade but I knew my real place was in the fourth. Doing the same work over that I couldn’t do the first time became more and more isolating….  School was so crazy for me I just barely got by.”

At home, he moved further into his fantasy world, fueled by shows he saw on TV.  Still, something in him just knew he was meant for bigger and better things.  Back at school he’d gone from being “the chocolate bar” to “Uncle Tom,” because court-mandated busing was bringing in loads of new black kids, and he already knew the old white ones.  Somehow Roger survived the rioting that ensued.

His only real break in the classroom came in seventh grade.  With no explanation, he was placed in advanced creative writing.  Though it took him “ten times” longer to write his stories, he could see they were the best in the class.  “I realized I had a creative mind but I couldn’t get my creativity on paper. The stories were so well-told that they gave me a ‘pass’ on the grammar.  It was the first time I thought, ‘So I’m not dumb, I am good at telling stories!’  And even though it was exhausting, I kind of enjoyed it.”

“I realized I had a creative mind but I couldn’t get my creativity on paper. The stories were so well-told that they gave me a ‘pass’ on the grammar.  It was the first time I thought, ‘So I’m not dumb, I am good at telling stories!’  And even though it was exhausting, I kind of enjoyed it.”

Roger’s only social plus was realizing that he was gay. That helped him find friends in the “out” crowd.  He got on with the other marginalized kids—the geeks, the punks, the other gay kids.  It also permanently cured him of any ambition that reeked of  “average” or “suburban.”

To his mother’s delight, he somehow graduated from high school and started college.  He put in some time at a state school where he “saw no one like himself.  One day, he just packed up his car and left.  Next came a community college near home.  He wasn’t happy.  Then audacious, imaginary Roger kicked in and cut loose.  The Roger who’d always secretly believed in himself applied to the colleges he really wanted to attend. His life story, so well written—strained grammar and all—earned him a full scholarship at expensive, exclusive New York University.  He came alive in New York City.  Roger Ross Williams would earn the first “A” of his life in an NYU math class.  He would also self-diagnose after reading an article about something called dyslexia.  And he would discover his profession—journalism—doing an NYU internship in the ABC News library.

Imaginary Roger kept coming to life.  After graduating from NYU, Williams set out to become a man of the world, living first in Paris, then Geneva.  He remembers being stunned that there were separate stores for coffee! And bread! And cheese! He was in heaven. 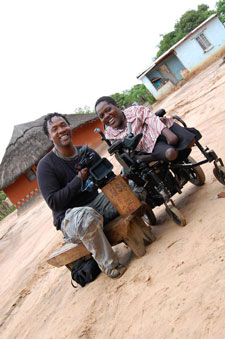 Roger Ross Williams with Prudence, the inpiration for his documentary, “Music by Prudence.”

Then he established himself as a journalist.  As a segment producer, and then documentary producer, at virtually every network from Comedy Central to NBC News, he picked up countless awards.  He worked with everyone from Michael Moore to Barbara Walters.  At New York Times television, CNN and PBS, he developed his reputation as the go-to producer for the tough documentaries—the ones that required creativity.  Each documentary demanded a written script, but he had a friend who’d clean up the grammar before he turned it in.  He was masterful at the harder parts—figuring out how to tell the stories, shooting, structuring, and editing.  His rapport with story subjects was as natural as breathing.   But Roger Ross Williams got tired of being told what to cover.  The confines of corporate story definition became claustrophobic.  So Williams did (without hesitation), what ninety-nine point nine percent of his colleagues were terrified to do—he went out on his own.

He knew he wanted to do a story in Africa.  A friend called about a wheelchair-bound deeply disabled artist named Prudence, whose singing would knock his socks off.  It’s the kind of story no one else would touch. Roger Ross Williams went to Zimbabwe and after the initial day of filming, went back to the hotel and wrote his Oscar acceptance speech.   He went on to become the first African-American to win an Academy Award for producing and directing, as well as for his category: short form documentary.  Music by Prudence will be shown on HBO this May. (For more information about the film, visit www.MusicbyPrudence.com.)

With Oscar in hand, he was invited back to his hometown for Roger Ross Williams Day.  He remembers it as completely surreal.  Yes, Williams took a jet plane, then a limousine and got the key to the city.   Then surrounded by his mother, and every possible local dignitary, the high school principal turned over the microphone to him at the assembly.  No one was prepared for what came next.  Roger Ross Williams found himself saying, “I’m here to talk to the kids who feel like total losers.  You are the kids who will probably rule the world.  This high school situation is temporary. Don’t let this define you.  You are the kids who are going to do great things. You have so much to offer you will probably surprise yourself and someone else.”

He remembers a flabbergasted principal grabbing for the mike, trying to wrench the message back to something more mainstream, while a pilgrimage of the awkward and the lost made their way to Williams in tears, seeking more personal contact.  Williams was taken aback.  They thought he had the answers…  What he knew was that little Roger wasn’t stuck here anymore.  And in his struggle to get out, his imagination had triumphed, and his inability to read had probably opened more doors than it had shut.

“The most creative people I know are dyslexic.  Dyslexia has given me the gift of creativity, understanding and empathy.  All my films are about people who have been rejected by society: people with disabilities, autism, Alzheimer’s, or are gay.  It has also given me an incredible ability to cope or solve problems in my own life in a creative way.  I have dared to dream my whole life, and have been lucky enough to have a lot of those dreams come true.”