By the time ice dancer Meryl Davis arrived at the 2014 Sochi Olympic games, only being the best in the world would do.  Along with partner Charlie White, Davis danced a dramatic, daring routine to the music of “Scheherazade,” the Arabian Nights tale of seduction.  Together they captured the hearts of a worldwide audience and the first American gold medal ever for Ice Dancing.  The grace and ease Davis displays on ice are in stark contrast to her younger years in school, where her struggles with dyslexia taught her that grit and perseverance can give you the strength to shine on and off the ice.

Davis’s triumph was seventeen years in the training.  While many athletes on ice have juggled school and skating (some got by skimming through textbooks while the Zamboni resurfaced the rink), Davis believes the extra challenge of her dyslexia actually gave her advantages.  Her schoolwork took her at least twice as much time every day, but built immeasurably more character.  “From an early age I realized that if I wanted to achieve things and I wanted to be successful, I had to put in the work.  And I think that’s really translated on to the ice.” 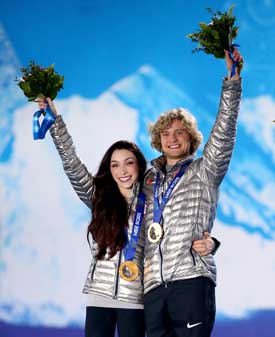 Before the international panel of meticulous Olympic judges, Davis’s high-wattage smile and convincing charismatic execution were the demeanor of a woman born believing in herself.  In fact, off the ice, Davis earned her self-esteem the hard way—proving herself to the toughest judge in the world: Meryl Davis.  Her first hurdle was overcoming the secret assumption of stupidity that accompanied her dyslexia.  “Self-confidence is really a big deal, as is feeling intelligent.  It took me a really long time for my parents to convince me I wasn’t unintelligent.  I feel so lucky and blessed to be born into a family who helped me.  And I am stronger today because of it.”

Little Meryl first found herself wobbling on blades on the frozen lake behind her family home at age five.  By six she was excelling at lessons and liking it.  Early school, by contrast, was a fuzzy puzzle.  Meryl didn’t understand why everything reading-related took so long.  “I was spending a lot of time getting the homework done.  My parents said, ‘You have to go to sleep.’  I’d wake up to do it in the middle of the night.  I was embarrassed not to have it done.  I never showed up without the work done.  And I always took pride in never quitting.”

Davis can’t account for her precocious drive except to say that “It was always just there—I’ve never been anyone else.”  But her determination didn’t remove the drudgery.  “It was always the reading; I just couldn’t rattle through it.  And my writing was discombobulated.  I had to focus really hard and go through things over and over to make sense of them.”

Fortunately, Meryl was born to a special-education teacher.  By third grade, Meryl’s mother had taken her to a specialist for her official dyslexia diagnosis.  With the help of her mother’s insightfulness and tutoring and with willing, supportive elementary school teachers, Meryl got through public school.  Meryl still had to put in the extra effort, every day, even as her practice time on the ice also increased.

At age ten Meryl switched to ice dancing, partnering with a little boy at the rink named Charlie White.  They were still at an age when the opposite sex “had cooties.”  Their coach wisely put smiley stickers on their foreheads so each could avoid looking into the other’s eyes.  They hit it off.  For the next seventeen years Meryl would trust Charlie not to steer her wrong.

Skating practice consumed more and more of the day as the pair moved up in competitions.  For Meryl, so did her homework with each progressive school year.  Comprehension was never the problem.  It was the sheer mechanics of getting through written material.  Meryl would doggedly complete school assignments, with her parents trading off nightly tutoring.  It never came naturally.

I learned how I learned and how my brain worked.  It helped me adjust and compensate for my differences…. It opened me up to problem solving, seeing things differently, and how I can help myself overcome things.

Skating, on the other hand, became a labor of love—an escape from the arduous task of reading.  “With skating I could feel it more than see it,” Meryl described.  “I fell in love with it because it made sense to me, partly because I see things differently.  I learned to enjoy it, worry free, in terms of moving with the music.  It’s been a really beautiful part of my life.”

By high school Davis had made an enormous leap with her homework misery—gaining insight that would allow her to graduate with honors.  “I learned how I learned and how my brain worked.  It helped me adjust and compensate for my differences…. It opened me up to problem solving, seeing things differently, and how I can help myself overcome things.”

It was on to the prestigious University of Michigan for Meryl.  Away from her parents’ help, she saw just how much she had really progressed from her early years of struggling with the words on the page.  For the first time, she was reading books on her own.  “My roommates thought I was spending much more time on the homework than I should, but at UM, I started loving school…. I finally got a lot of joy from learning new things.”

With her training and competition schedule, she would become one of the school’s slowest Anthropology majors—at age 28 she is a junior—but not for a lack of desire or intelligence; her training schedule did not allow enough time for a full course load.  For most of what would have been typical college years, she was on the ice.  Practice ballooned to ten hours a day.  Training was “more boot camp than ballet.”  There were many days Davis didn’t see the sun.

After five years of those demanding workouts and travel and competition schedules, with a singular focus on their dream, Davis and White became America’s first World Ice Dancing champions.  By the Sochi Olympics, the gold was theirs to lose.  It takes one kind of determination to reach the top, and another kind of cool to stay there.  Davis proved she had both.

In a tempestuous sport, filled with artistic temperaments, Davis stands out for not being a diva.  She has the exceptional reputation of being a “soothing partner.”  Between her showmanship and nerves of steel, she stays remarkably calm, even under pressure.  For this, she thanks her dyslexia.  “It [dyslexia] never goes away, but it is more of a positive than not…. Patience with oneself is the key to learning how to be your best self in any case.  Just because things come differently to you doesn’t make you any less.  You have to rely on the people who are there for you.  I have come out the other side.”

Davis and Charlie White continue to work out together on free days, but laugh through it—the pressure is off, for now.  They agreed not to decide their joint athletic future for at least a year.  It may be back to defending their gold, or going professional and really seeking fame and fortune.

In the meantime, they’ve traveled the world, accepted endless awards and honors, done countless media appearances, taped television shows, gone on tour with the “Stars on Ice” program, and been the commentators at competitions.  Davis keeps a bag nearly permanently packed, lives close to the Detroit airport, and could play the same recorded plea to each TSA agent begging them to allow her to carry on her skates.

But even road weary and exhausted, Meryl also carries with her empathy that springs from her battle with the printed page.  That empathy has led her to visit sick kids in hospitals, and help young students in classrooms across the country.  She didn’t talk about her dyslexia in depth before the Olympics—not because she was ashamed, but because she wanted the skating to stay center stage.

Post-Olympics, Davis’s view of the world has broadened.  Win or lose, gold medal or no medal, struggling with dyslexia or having reading come easy, the point, Davis tells students, is to set goals and strive.  Real success, Meryl Davis now believes, is finding happiness.  And by that definition she absolutely declares herself successful.