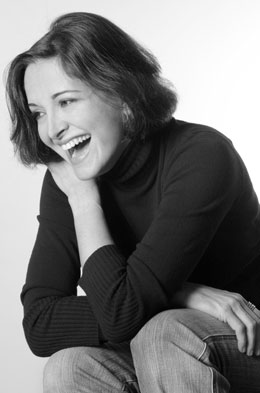 Carmen Agra Deedy sings these lyrics often, after masterfully telling the story of falling hard for her first book. She was eight, it was Charlotte’s Web, and it began a lifelong addiction to stories and reading and books. But Deedy doesn’t always tell how troubled her addiction is. She has dyslexia. She is a dyslexic bibliophile. None of her accomplishments have come easily. She taught herself the craft of storytelling. Her reading has always been labored. And her award-winning children’s books battle their way from brain to printed word with great difficulty.

Deedy has received honors worldwide. Her first stories aired on NPR’s “All Things Considered.” She compiled 12 as a book and recorded them on CD, Growing Up Cuban in Decatur, Georgia. She tells each story with rapid-fire speech, pitch-perfect accents, humor and poignancy. Next came her dozen books for children. She has performed her stories for Pulitzer Prize winners, Nobel Laureates and heads of state, but her favorite audiences are still young kids. She spends nearly half each year reading to kids—kids young enough to magically embrace her Library Dragon (a creature who cares more about the books than the children wanting to read them), or Martina the Beautiful Cockroach (a looker of a bug ready to give a leg in marriage). Deedy believes deeply that stories create community. She says, “We are social animals, and a good story creates empathic ties—flinging about a gossamer thread that captures each other’s imaginations.” 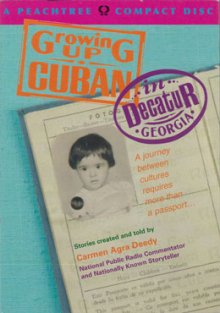 Her own story is all too real. She landed in small-town 1960’s Georgia at age three, her family having fled Castro’s Cuba. She was a dirt-poor, shy refugee in hand-me-downs, able to speak only Spanish. Little Carmen didn’t have a friend in the world. She describes herself as so sensitive, “I had no exoskeleton to protect me.” And like the Peanuts character Pig-Pen’s dirt cloud, Carmen was constantly dogged by a depressed view. She thought of herself as the odd girl out.

When it came time to read in first grade she was lost. She had learned the sounds of her native Spanish language. But now the teacher was demanding that she affix English phonics to the letter blends. Carmen couldn’t make the switch. She knew her letters. She spoke some English by then, but reading it? Writing followed reading. Math only made it worse. Those symbols attached to nothing. A teacher repeatedly pointing at the page made no more sense than if she were singing backwards pointing her pinkie in the air to keep time. Carmen shrank inside herself. When the first grade teacher announced her intention to take the yardstick to Carmen’s shins because she couldn’t “cipher,” Carmen bolted out the door and ran home. Now she knew she wasn’t just weird, she was dumb, too.

Her family moved to a wealthier, whiter neighborhood school going into the third grade but it only made things worse. Carmen was still poor, and Cuban, and she remembers the year at Cascade Elementary as just plain sadistic. It was open season on bullying because the biggest bruiser was her teacher, a woman whose name and face Deedy has blocked. Carmen’s spelling was bad and her multiplication worse. She had problems with her spatial sense, and would “go in the out door.” Although she really loved to read, she just couldn’t read as fast as the other kids. Little Carmen was ostracized with nasty names and singled out to stand at the blackboard with her nose to a small circle as punishment because she couldn’t complete a math problem. With tacit license from the teacher, Carmen was beaten up by the other kids almost every day. The scars from Cascade Elementary run so deep, Deedy returned to look at the school only recently, over 40 years after her traumatic experience there.

However, neither what any of her teachers did nor her dyslexia could quash Deedy’s love of reading. There were worlds to be had between those covers and Carmen was going to share them. Also, as she now says, written words go places other forms of communication can’t: “Books are the friends of deep thought.” Yet, young Carmen told no one of her troubles—especially not her parents—she believed she had to solve her own problems. Deedy vowed to thicken her skin and keep going. “You only become tough by exposing yourself to what is hard, not hiding from it.” She was insatiably hungry for knowledge. Her first shot at not being odd, stupid and sad, came from a no-nonsense teacher in fifth grade.

Deedy was given a written test for an enrichment program and didn’t make the cut. But she overheard her fifth grade teacher arguing on her behalf on the other side of the principal’s door. “She’s not stupid,” Carmen heard her teacher say. It hit Deedy like a thunderbolt. She got into the enrichment program for gifted students, and it changed the way the teachers looked at her and also the way she saw herself for the first time in her life. She won a blue ribbon at the county science fair. She had never won anything in her life. The program taught things she was interested in, and encouraged her to reach for something. Deedy attacked her homework compulsively. She became an A/B student, pounding away on the homework for many hours each night.

Still, Carmen Deedy remained conflicted. She couldn’t make sense out of this combination of being smart/dumb. She knew something about the “gifted” thing was a mistake, but thought maybe the mistake would help her be smarter because maybe if she could act like a smart kid it would turn her into one.

Ninth grade finally brought another thoughtful teacher. Miss Collins sent Deedy home with a play and a portable dictionary—she’d never heard of one. Carmen could look up words on the spot! She spent all night reading the play, ran to Miss Collins in the morning, and demanded to know if “this guy” had written anything else. Miss Collins howled. The play was Macbeth, and the author was Shakespeare.

Carmen Deedy didn’t get much of a chance to let her voracious mind loose in college. After a single semester, she had to drop out to earn money for her family. At 19 she married and at 21 was having children. Her dark cloud of a mood, however, lifted with her babies. That darkness turned out to be something like what her father had told her: “That mood is like a sock,” he’d said. “You can turn it inside out and look for the joy.” Without a career in mind, she took her three girls to the library. But in the children’s section, Deedy found both her past and her future.

They all wallowed in the picture books. She remembers the library allowed her kids to check out as many books as they could carry. And she recalls her girls dragging bulging canvas bags along the floor. They shared the wondrous worlds of The Five Chinese Brothers, Lyle, Lyle, Crocodile, Make Way for Ducklings, and on and on…. With the picture context, Deedy could read with her children more easily. Thus the library inspired her career: first she taught herself how to tell the stories of her youth, then she taught herself how to write the stories of her imagination. She got heard, and was published.

Carmen Agra Deedy finally learned she had dyslexia when she sought out her own testing at 28. She was also told she had trouble distinguishing phonemes correctly and may not have understood a lot of what had been said in class. Now, awaiting the birth of her second grandchild and release of her first adult novel, Deedy feels she has spent her whole life retraining her brain and guessing at what “learning normal” is. Her advice to others with dyslexia is to aim for learning and love, and let success take care of itself: You have to learn to trust yourself. Learn everything. Everyone has something to teach you. Everything is interconnected. And you have to trust that whatever process your brain has for acquiring knowledge makes you your own self. Everyone has some kind of gift. At the end of this life you are not going to care about all that you have achieved; you will only care if you have been happy.