Gareth Cook is a journalist and is currently a writer for The New Times. Cook’s writings have appeared in The New Yorker and he served as a series editor at Houghton Mifflin Harcourt.  He spent seven years as the Boston Globe’s science editor reporter, and during that time won the Pulitzer Prize (2005), the National Academy of Sciences Communications Award (2005), and the Woods Hole Oceanographic Institution Ocean Science Journalism Award (2005).  In awarding the Pulitzer to Cook, the judges commended him for “explaining, with clarity and humanity, the complex scientific and ethical dimensions of stem-cell research.” 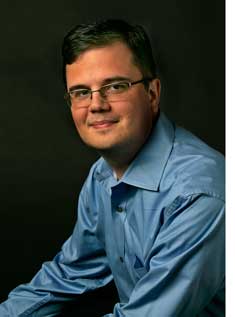 In 2005, Boston Globe reporter Gareth Cook received the Pulitzer Prize for Explanatory Journalism for his yearlong series of articles on stem-cell research. It was the Globe‘s 20th Pulitzer, and its first in the category of Explanatory Journalism.Globe Editor Marty Baron praised Cook for “cutting through the rhetoric and all the political posturing” associated with the stem-cell debate and said that his accomplishment was especially significant, given the Globe‘s long-term commitment to “excel where Boston excels,” as a center of scientific research. “For many years now,” he said, “we’ve come to rely on Gareth for what we consider the best science writing in America.”

Winning a Pulitzer is an extraordinary achievement for anyone, particularly a person with dyslexia, as is Cook. As a child, he read slowly, had difficulty writing in cursive, and failed miserably in spelling. He can still recall the humiliation of fifth-grade spelling bees. And the scowl on the face of his seventh-grade English teacher, as he passed back another spelling test splattered with red marks. Cook’s most challenging problem, as he got older, was an inability to take good handwritten notes while listening to a teacher or lecturer.

In “Life with Dyslexia,” a 2003 article he wrote for the Globe, Cook describes those early problems, as well as others that persist, including his “profound inability to navigate around town, even relatively familiar places.” Dyslexia was generating a lot of interest at the time, with cover stories in major magazines and the release of Overcoming Dyslexia, by Dr. Sally Shaywitz, the Audrey G. Ratner Professor of Learning Development at the Yale University School of Medicine and co-founder of The Yale Center for Dyslexia and Creativity. Cook spoke with Dr. Shaywitz, who told him that the stigma associated with dyslexia was going away and that there was no reason to be ashamed. “That’s when I decided: time to come out of the closet,” he says. “I also had to write this because I know there is at least one kid out there who is feeling the despair that clawed at me for many years. I want this kid to know: It’s never going to be easy, but put your heart into it and you will blow them away.”

Nevertheless, he worried about how his editors, co-workers, and sources on the science beat, which he covered, would react. As it turned out, their responses were overwhelmingly positive. “I was surprised at how supportive everyone was,” says Cook. “I didn’t think anyone would be mean about it, but I got a huge response, not only from people in the office, but from people all over who had had similar experiences. For example, parents whose kids had been diagnosed recently said they found it very helpful to hear from someone who has a successful career even though he is dyslexic. I also heard from older people who were diagnosed at a much later age and have struggled with it all their lives. People are diagnosed much younger now, and it’s really great that so much more is done about dyslexia to help kids earlier.”

Because Cook himself was not diagnosed until his freshman year in college, he did not receive any special help or accommodations in school. “One of the things is that I don’t have very severe dyslexia,” he says. “If it had been severe, I think it would have been really obvious. There were specific things that I found hard to do, but I was able to sort of work around them, and since I did well in school, I didn’t have any reason to think there was a problem.” As for his spelling difficulties, Cook says there was not much he could do about them. “I think I was just considered careless or a bad speller. It was just something that for whatever reason I had a lot of trouble with. In high school, I took French and would routinely not do very well on tests where spelling mattered, which was also the case in English, but I was usually able to do well on other tests. It’s not like in high school where they’re just testing spelling. On standardized tests like the SATs, I actually did quite well.”

“The big problem, in high school and college, was note taking. I got around the fact that I couldn’t take notes very well by studying with people, so I would use their notes and was able to help them in math and other subjects.” In the absence of a fellow student to take notes, Cook took his own, a laborious task, since it took him a long time to write in longhand. “For whatever reason — I have no idea what that is — it’s a lot easier for me when I’m typing, so in college I started using computers more and, obviously in my job now, I use computers all the time.” Although he has improved his handwriting skills, Cook says, “If I had to just take notes by hand, I don’t think I could function as journalist. I am really quite bad at that.”

After working as a writer and editor at publications including Foreign Policy magazine, U.S. News & World Report, the Washington Monthly, and the Boston Phoenix, Cook joined the staff of the Boston Globe in 1999.  A high point of his Globe career so far was his seven-year stint reporting on science, which Cook describes as his “passion.”  That period produced his Pulitzer-winning work on stem cells, as well as the 2005 Ocean Science Journalism Award, from the Woods Hole Oceanographic Institution, and the National Academy of Sciences Communications Award, which he won that same year.  Following several years as the editor of “Ideas,” a Sunday section of the Globe, Cook worked as a columnist for the op-ed pages before leaving the newspaper to work as a freelance journalist, and submit articles to The New Yorker.

When asked, in light of his many successes, if Cook considers his dyslexia an asset, as do many who credit the disability with boosting their creativity and helping them see “the whole picture” of an issue, he said, “I suspect it’s true, but I can’t get into someone else’s brain. It’s sort of hard to think what it would be like to be different. I believe dyslexia is sort of central to the way I think and the way I approach problems. There are definitely things that others find quite easy to do that I find quite hard, and things that are quite easy for me but are hard for other people. I wish I wouldn’t get lost so easily; I wish that it weren’t so hard for me to take notes, for that’s kind of a constant problem with this job. But I have a very happy life and a good professional life, so I don’t feel like I would want it any other way.”