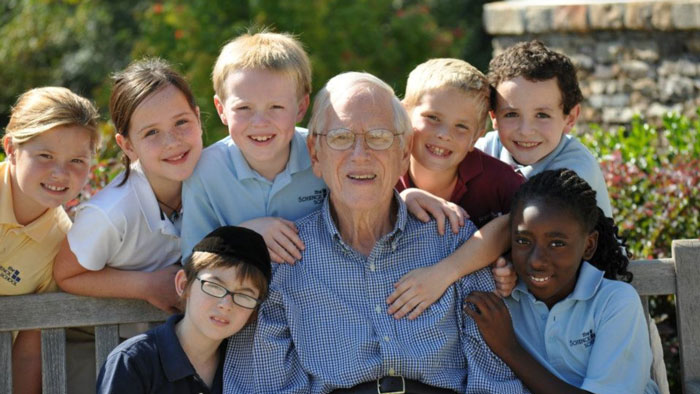 David Schenck with students (photo: The Schenck School Board of Trustees)

In 1959, David Schenck set out to help children overcome their dyslexia, and recover their lost self-esteem, with the core belief that “Schools should not frighten children.”   Schenck, the man who founded the school for dyslexics in Atlanta, Georgia, and took the visionary approach of teaching a classroom of children with dyslexia using Orton-Gillingham (originally developed for one-on-one instruction), only learned about his own dyslexia during a fateful career change in the 1950’s.  And yet, he was precisely the kind of person whom dyslexic children needed; David Schenck knew their struggles with decoding words and he knew what it is like to be smart and still fall short in school. 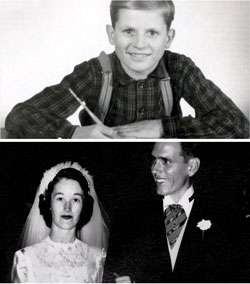 Top: David Schenck as a student. Bottom: David with his wife, Dee, on their wedding day.

Growing up in Chappaqua, New York, David Schenck started out in public school, and “had trouble right from the very beginning.  I didn’t feel like I was part of the class. I didn’t feel like I could do any of the things they did.”  An uncle paid the tuition for him to go to The Salisbury School in Connecticut.  When David arrived, “They never had seen someone so poorly prepared for their school,” he says.  “I had to go back a couple of years because I didn’t know anything about reading.  I didn’t know anything about writing. Here I was trying to go to the 7th grade, but having lots of trouble there. I went from Salisbury, graduating when I was 20, directly to the Army, and from the Army I took advantage of the G.I. Bill and got a degree from University of Michigan.”

From Michigan, Schenck did odd jobs and worked in warehouses until he and his wife took the plunge into teaching.  When David Schenck, along with his wife Dee, left Mobile, Alabama, for a teaching position in New England, he did not know that this move would be the start of a journey that would change his life and the lives of thousands of young people with dyslexia—nor did he know, at that time, that he himself was dyslexic.  They found jobs with The Rectory School in Connecticut.  The school wanted them to work during the regular school year and at a camp in Maine during the summer.  The camp was for dyslexics and run by Page Sharp, an associate of Dr. Samuel Orton, and it was there where David Schenck received his formal introduction to dyslexia and training in the Orton-Gillingham approach.

It was a rough start, especially since Schenck still hadn’t overcome his own struggles with schoolwork.  There was a point where he was ready to walk away from it all—right about when he realized he also had dyslexia.  “I met the first kid and all of a sudden I realized he was my spitting image.  I should have been at that camp [as a student].  He couldn’t spell.  I couldn’t spell.  I told Page Sharp, ‘I have to leave.  I don’t know what I’m doing here.’”  Encouraged by Sharp, Schenck stayed on at the camp, and with the help of the other teachers, especially his wife, he worked on decoding words for himself, using the same methods he used with the campers. 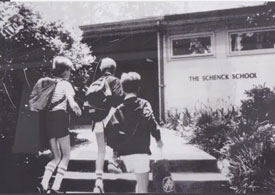 After a few years of working at the camp in Maine and The Rectory School during the rest of the year, David and Dee returned to home base in Atlanta.  He earned his master’s degree in education at Emory University and landed a teaching job at Georgia Military Academy (now Woodward Academy).  He was charged with teaching students how to read and write.  “I was working with a class of high school students.  They were on their way out of the school because they were failing and coming to me for a half an hour once a day.  It didn’t save them. For those who only needed practice reading, it may have worked, but for the majority who had a disability, it was of little value.  These kids desperately needed help, a program dedicated to learning how to decode words.”

From that environment, and those limitations, the idea for The Schenck School was born.   “So I quit my job at Georgia Military.  I was tutoring some children at the time.  And not knowing anything about running a school, I started a school in the basement of St. Anne’s Church.  With, say, six kids, we did language and we did math.  We used Orton-Gillingham.  I was in charge.  I closed the door.”  With Dee’s help, these children, and thousands of future children, got the appropriate intervention they desperately needed.

“I looked at this kindly gentleman sitting so naturally on that little chair with his knees sticking up, who had as much trouble keeping his shirt tucked in as I did, and I relaxed, knowing perfectly well that here was a man who could understand a kid who was having the kind of trouble I was having.”
– Rob Hill, former student and parent

A former student and Schenck School parent, Rob Hill remembers his first impression of David Schenck, when his parents brought him to the house that contained The Schenck School at the time: “He was tall and lanky with a head full of rebellious hair. He had that absent-minded, disheveled appearance that belongs either to a genius or a child.”  Later, Hill would learn that he was the best of both—“a combination of Albert Einstein and Willie Wonka.”  During that first meeting, young Rob “looked at this kindly gentleman sitting so naturally on that little chair with his knees sticking up, who had as much trouble keeping his shirt tucked in as I did, and I relaxed, knowing perfectly well that here was a man who could understand a kid who was having the kind of trouble I was having.”

The Schenck School Head of School Gena Calloway agrees.  “He’s a magical person.  Children are drawn to him.  He’s dyslexic—very dyslexic—and he talks about it and knows what these children need.  I think he could teach a stump to read.  He says if you give him a sandy beach and a stick, he could teach a child to read.  He doesn’t need a lot of fancy stuff.”  Although the current school, a sprawling stone and stucco building with courtyards and large outdoor play areas, could be considered “fancy” by some, there were a lot of (uphill) steps on the way from the church basement to its current facilities that include an enticing and enchanting library with welcoming nooks in which to read and a rock-climbing wall.  The journey on the way to this facility says a great deal about Schenck’s dedication, perseverance, and caring for young people with dyslexia.

The Schenck School has survived multiple moves, a fire, and an increase in student population, from less than a dozen to the current 250 full-time students, with grace and lots of tenacity—taking after its founder, and Emeritus Head of School, David Schenck himself.  Early on, when David and Dee were buying a property to house the school, they ran into legal issues with the property, but instead of giving up they found one of the top attorneys in town to take the case pro-bono.  They won.  The children had a place to learn how to overcome their dyslexia.  “This sort of sums up that story of how the school came to be,” says Rob Hill.  “The way David understood it: there were kids who were being told they were stupid and that wasn’t right and he was going to do something about it.  Which was really a sweet thing.  That’s all you need to understand from the outside.” 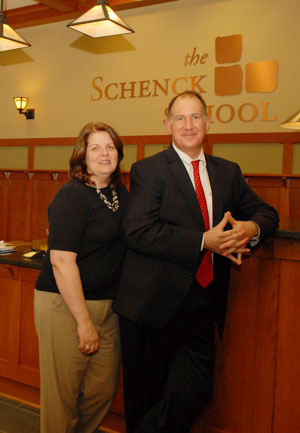 Former Schenck student Rob Hill with his wife Ellen, Director of Outplacement at Schenck. They are also Schenck School parents.

Schenck had other people rooting and working for him and the children, as well, including Rob Hill’s father, Bob Hill, an Emeritus Trustee of the school. “My dad got very involved in the school when I was here, and stayed involved.  He was chairman of the board when I was in college and the school burned—1986.”  Hill rolled up his sleeves and was an integral part in keeping the school and its mission moving forward.  Bob Hill, and others, saw David Schenck’s vision, and wanted the school to be rebuilt, even bigger and better than before.

The Schenck School has not only expanded its student body and facilities, it has also expanded its repertoire to include more of the Atlanta community.  They have an adult evening program that helps adults who are looking to overcome reading difficulties due to undiagnosed dyslexia—there is a screening process to identify dyslexia in adults who find or are referred to the program.  Schenck also hosts an after-school tutoring program for Atlanta-area children with documented reading difficulties and financial need (dubbed the SHINE Tutoring Program for “Schenck Helping Individuals in Need Excel”) and a teacher-training program for educators working outside The Schenck School.  Additionally, the school offers a Summer Adventures Program for students currently enrolled in the school full-time and those students attending other schools, and in-school occupational therapy, as well as study labs and other after-school enrichment opportunities.

Both Schenck the school and Schenck the person remain dedicated to helping individuals overcome their dyslexia and celebrate their achievements. David Schenck’s perseverance continued until his death in December 2014 at age 93.  Even in his nineties, he would still come to graduations and other special events at the school.  “He would have still come to the school daily, if we let him, if he could have managed it,”  says Calloway. Even after his death, countless more dyslexic children will benefit from his vision well into the future.

And, of course, David’s wife, Dee, was by his side, overseeing the nuts and bolts of the school, until her death in 2010, to help ensure that his vision came to fruition.  “Dee was a great person,” explained David.  “She could do a lot of the things.  So, she could keep the books, she could organize things, and we both tutored.  I tutored about eight children.  She tutored about the same, while the school was starting up.  We just kept at it.” Dee, after all, was not only David’s wife, but his partner in the school, and his support system for overcoming his own dyslexia.  She understood David’s drive to start the school.  Prior to her death, she reflected on the formation of the school, saying, “You look back on it and you think we were just utter fools to do it, but I think we got so interested in the whole problem and I think David was driven by realizing that his own trouble all through school, unbeknownst to him, was that he was dyslexic.”

In 1996, Elizabeth “Liz” Ball spearheaded a class-action lawsuit against Boston University for disparaging comments made by the university president about students with disabilities, and for the school’s refusal to grant them waivers from the foreign language requirement.