Ranked among the top forecasters in the United States and the most influential women in business, Diane Swonk is an advisor to the Federal Reserve Board and regional Reserve Banks, and recently completed her second term serving on the Congressional Budget Office’s panel of economic advisors.  An adjunct professor in DePaul University’s M.B.A. program, she also serves on the City of Chicago Climate Change Finance Committee and the Chicago Conservation Center advisory board.  Swonk was named a Fellow of the National Association for Business Economics for her outstanding contributions to the field and is the author of The Passionate Economist: Finding the Power and Humanity Behind the Numbers.

Diane Swonk is an internationally recognized economist and a financial commentator on national and international television. She is also a resource for global business leaders and policy makers and a sought-after speaker for business and youth groups, “I can’t read a speech,” says Swonk, who is dyslexic. In speaking, she has found, it helps a great deal to plan her talk very carefully; “I write out the thoughts I want to cover and make an outline, but I never look at it while I’m speaking. The art of communication is something I’ve worked hard at.” She has worked hard to compensate for her dyslexia. “I spent a lot of my life insecure,” she says. “I couldn’t memorize the times tables or add a column of figures, and I didn’t know left from right, but calculus and algebra were a piece of cake.”

At a progressive school outside of Detroit, Swonk studied reading through an experimental program based on a “made-up” language of sounds and symbols. “I learned in a nonconventional way, and ironically, it was a better way for me to read quickly,” she says. In fifth grade, when required to read standard English, Swonk says she “hit a wall,” and in sixth grade, her teacher had no tolerance for her inability to spell correctly, in view of her high score on IQ tests. A high school English teacher was equally unsupportive when Swonk had difficulty with an assignment to read and report on the novel The Lord of the Flies. So was her father, who hid his own dyslexia and had been sent to military school after several parochial schools gave up on him. “His view was, ‘If you can cut butter with a chain saw, then cut butter with a chain saw.’ I saw then that I had no choice,” says Swonk. “If I have to work twice as hard to do it, I’ll do that.” 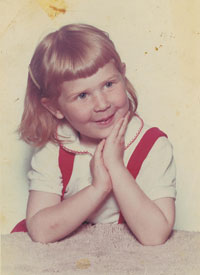 In addition to being a hard worker, Swonk says she is “always on. The way I learn is never to turn off, and the more I learn, the more I know I don’t know.” She also prides herself on her strategic-thinking abilities, and figured out in middle school what it took to get As. Observing that teachers tested on what they said in class, she had perfect attendance, sat in the front row, and took meticulous notes in three colors. At the University of Michigan, where she was admitted because her parents were alumni, Swonk struggled at first. After nearly flunking freshman English and taking extra classes to make up for an F in German, she found her stride in higher-level math and economics. “Economics was easy and very intuitive, and that’s how my mind works,” says Swonk. “It was also intellectually stimulating, and I felt like I belonged.”

Swonk has over twenty years’ experience in financial services and is a household name to viewers of the nightly business news. Yet she was reluctant to reveal her dyslexia until about eight years ago, when Forbes Magazine published an article on such famous dyslexics as Charles Schwab and Richard Branson. “I realized I wasn’t alone, and that there was a world out there where I could be accepted and be who I was,” she says. “Now I’m very open about my dyslexia. It’s part of who I am and it’s made me who I am. If you want strategic thinking, come to me. If you want linear thinking, don’t come to me.”