“To get as far as I have, I had to find a way to move forward when nothing worked…. I may skate slower than anyone else—but I know where you are going before you do…. I have this fine-tuned super focus—that also came from the dyslexia.  I wouldn’t be where I am today without it.” 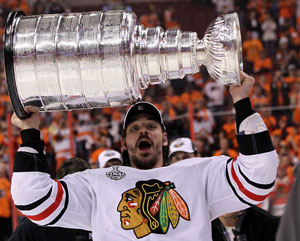 In Brent Sopel’s eighteen-year professional career, working hard is part of the game.  Both on and off the ice.  He prides himself as being a hard-working player in hockey.  Not the graceful guy.  Not the flashy one.  Just that pro who doesn’t duck the dirty work.  Brent Sopel is a shot-blocker, and he blocks them so well he helped the Chicago Blackhawks bring home the National Hockey League Stanley Cup in 2010—Chicago’s first cup in nearly half a century.  Hockey is a speedy, brutal sport—huge athletes on hair triggers, trained to pummel others in their way—slapping a puck at speeds of up to 100 miles an hour.  Sopel is a fearless and deceptively facile defenseman.  He senses a puck coming and will stop it with anything, including his face.

Sopel attributes a serious piece of his ability on the ice to his inability off it.  “To get as far as I have, I had to find a way to move forward when nothing worked.  I learned how to deflect and how to bridge.  I have to give dyslexia the credit for those.  When everyone else is scrambling to get out of the way, I get in it.  I may skate slower than anyone else—but I know where you are going before you do…. I have this fine-tuned super focus—that also came from the dyslexia.  I wouldn’t be where I am today without it.”

Hockey is a tough sport both on and off the ice.  Sopel has broken so many bones, he has lost count.  He has been traded so many times, he has become a human puck—pinballing about the planet from Los Angeles to Siberia in more than a dozen moves.  Yes, he actually played for a team in Siberia.  Now in his eighteenth season, he faces off against rookies half his age—almost half of whom will wash out in the first few years.  He’s skated for the love of the game, for contracts worth millions, and because this brave, elite athlete is actually scared.

“My biggest fear is life after hockey. I struggled to learn to read.  Some fans are insulted by my autograph because my writing is chicken scratch.  They are like, ‘Is that the best you can do?’  I can speak to a crowd of ten thousand, but have challenges reading to a group of little kids….  The truth is due to my dyslexia and dysgraphia; I am better visually and verbally.

Hockey would become Sopel’s salvation. It came to mean freedom, fun, and friends. School was more like silently banging his head against the boards while making sure nobody saw.

Sopel started playing hockey at age two and from an early age, his struggles with reading were already apparent. The rink would be his respite, the reading his unrelenting tormentor.  Nothing on those pages made sense except the pictures.  He listened to the teacher but couldn’t hear her.  In one ear and out the other, it was all mixed up.  He didn’t get it, so he hid it.  He “became a ball under the desk,” closing his eyes and playing, “I can’t see you, you can’t see me,” hoping desperately not to be called on.  He was forced to do second grade twice—already singled out as slow, already acutely ashamed.  “Reading, to me, was just painful,” he remembers.  “I hated every second of it.  I would just shut down.  It just made no sense…. Even today when it comes to reading I shut down.  I just feel intimidated, and think—screw this!”

Hockey would become Sopel’s salvation.  It came to mean freedom, fun, and friends.  School was more like silently banging his head against the boards while making sure nobody saw.  In nineteen eighties and nineties Saskatoon, Canada, no teacher detected a learning disability, much less dyslexia.  The consensus on Sopel was just “not enough tools in the box.”   He struggled to make peace with school, but little worked.  He remembers coming up with the “stupidest” mnemonics to make language stick in his head, as for directions: “Never Eat Soggy Wieners.”  He did better with things patterned on the board.  But it wasn’t reading.  “I felt so bad at school.  I lived in constant fear.  Sometimes I could make out some words, then I would skip what I didn’t know and make other stuff up for fluency.”

So many people with undiagnosed dyslexia have that moment, etched deep into a memory they wish didn’t exist.  Brent Sopel’s came in the ninth grade. His classroom camouflage collapsed.  The teacher spotlighted Sopel to read aloud in English.  He completely panicked.  After finding a word or two, he recalls filling in words until he was only riffing.  He just went off.  To this day, he has no idea what came out of his mouth.  When he finally stopped, it was to silent disbelief.  Not even laughter.  Later, a kid from class said to him, “I don’t know what you were reading, man, but it sure isn’t in that book.”  He felt busted and stripped bare.  He never wanted to feel that bad again.

“You are always guarded, so you find ways to get around certain things. Of course I was hiding it [dyslexia]. To this day very few people know about my struggle. I didn’t know how to handle it. I have been guarding and blocking my whole life. Deflect and bridge, dodge and block.”

“It really affects your approach to life when you live in fear.  You are always guarded, so you find ways to get around certain things.  Of course, I was hiding it.  To this day very few people know about my struggle.  I didn’t know how to handle it.  I have been guarding and blocking my whole life.  Deflect and bridge, dodge and block.”

Sopel achieved his high school degree. His father said to stick with the hockey and the rest would follow.  His father had a point.  Almost every little boy in Saskatoon dreams of growing up to be a major-league hockey player.  The vast majority of them just become fans.  Sopel played his first pro game the year after graduation, and was drafted into the NHL league at 18.  Brent Sopel launched the life of his dreams.

He settled his family in Chicago, but when they traded him ten days after the Stanley Cup win, he ended up doing most of the punishing road and rink time alone.  Sopel finally understood his dyslexia once a member of his family was diagnosed.  It was the first time he heard the D word and, at 33, the first time he realized he might get some answers. Sopel returned in 2014 to the Chicago Wolves team, where he planted his roots deeper in Chicago.

He knows he can’t be on the ice forever, “This career has been absolutely amazing.  I love the game.  I am still good at it.  But I regret not going to college.  I wish my parents would have been tougher on me at an earlier age to continue education.”

A career on the ice may not have given him opportunities to overcome dyslexia in the classroom, but his time in the NHL opened the door for opportunities for personal growth and more widespread advocacy after hanging up his skates.  Sopel may not have at first realized it, but life after hockey would be different because of hockey. These days he can’t walk a city block in Chicago without being recognized.  Tapped to do color commentary for the NBC station during the NHL playoffs, and a regular on 120 Sports, Sopel now loves being called upon in situations requiring excellent communication skills, situations he may have previously avoided.  His commentary is especially valuable to his co-workers and viewers alike as Sopel can read the plays on the ice before they even unfold, a “puck sense” made possible by years of practice and a mind that can see the “bigger picture”.   He has developed an honest, easy-going, self-effacing public personality, openly owning the pain of his own struggles with dyslexia in order to increase awareness and advocacy for a disability faced by so many.  Having just completed his 1000th professional game, he realizes that achievement does not come without struggle, and he is better for it.