As superintendent of the Denver Public Schools, Michael Bennet enacted a nationally recognized merit pay system for teachers and increased funding to the city’s early-education and full-day kindergarten programs. While serving as chief of staff to Denver Mayor John Hickenlooper, he helped close a 10 percent budget gap during his first two months in office and balanced two consecutive budgets, while preserving municipal services. 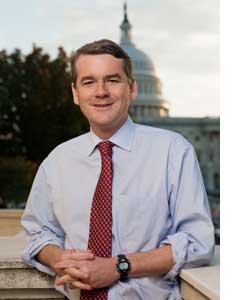 After graduating from law school, where he was editor-in-chief of the Yale Law Journal, Bennet clerked for the U.S. Fourth Circuit Court of Appeals and later served as counsel to the deputy attorney general for President Bill Clinton. He then took a seven-year detour into what he describes as “a very happy period of time in the private sector.” When his wife, environmental attorney Susan Daggett, took a job with the Earth Justice Legal Defense Fund in Denver, Bennet went to work as director of the Anschutz Investment Company, also in the Mile-High City. During his seven-year stint at Anschutz, Bennet led the reorganization of four distressed companies, which required the restructuring of over $3 billion in debt, and managed the consolidation of three major movie chains into Regal Entertainment Group, the world’s largest film exhibitor.

He returned to the public sector in 2003 to become chief of staff to Denver Mayor John Hickenlooper, a businessman and fellow Wesleyan University alumnus. Drawing on his own business background, Bennet succeeded in balancing a historic budget deficit, renegotiating several collective bargaining agreements, and stimulating job creation by working with struggling businesses in the private sector.

In 2005, he was appointed superintendent of the Denver Public Schools. The job was a perfect fit for Bennet, who is an avid supporter of education and providing equal educational opportunities for all students. A 2011 article in Time magazine by Andrew Rotherham listed Bennet among the country’s leading educational activists and predicted that if any changes were made to the No Child Left Behind Act, “or if anything else of significance happens in Washington on educational policy, this Colorado Democrat will be at the center of it.”

In a 2010 interview about her husband on the blog site ColoradoPols.com, Daggett said that she and Bennet were “acutely aware” of the inequalities in our society. “That was one of the things that really motivated Michael at DPS (Denver Public Schools),” she said. “Our kids have all the opportunity in the world because of their station in life. What motivated him was to make sure that kids who weren’t born with advantages had the same opportunities (as our kids)—and that the schools recognized that fundamental inequality.”

As a child, Bennet enjoyed the advantages made possible by his own parents’ social and economic status. One of these was the opportunity to attend a private school, where he was diagnosed with dyslexia at an early age and received the help he needed to work through his learning difficulties.

“I can remember, throughout the early years of elementary school, having problems focusing on my work, and I think they manifested themselves in the form of spelling issues,” he says. “The teachers at the school I was going to recognized that I was having trouble with spelling, and I think they knew I needed extra time and some extra attention, and that led to my repeating second grade.” Bennet’s initial reaction to being held back was one of sadness, “because all of my friends, one of whom is Susan Rice, who is now our UN ambassador, were moving on to third grade.” What he remembers most about his “second second grade” was spending a lot of time in a lab, tracing letters in sand that were glued to cardboard. “At some point,” he says, “my spelling difficulties went away, and that is almost all I remember about my dyslexia.”

Bennet credits his parents and teachers for being alert to his early learning difficulties and says that after second grade, he neither needed nor received any special help or accommodations. “There’s no way I’d be where I am now,” he says, “if somebody hadn’t noticed that I had issues with spelling and recommended to my parents that I repeat second grade and do the work I needed to do to move on.”

Other students, however, are not as fortunate. “I’m concerned,” says Bennet, “that there are a lot of children in this country who aren’t getting that close attention at school. More than 80 percent of the people in our jails are high school dropouts. I think it’s so important for us to acknowledge that everyone learns in different ways, and some students are struggling with disabilities like dyslexia. It’s incredibly important that we have systems and people in place to catch these things.”

Bennet, selected in 2009 by Colorado Governor Bill Ritter to fill the U.S. Senate seat vacated by now-Secretary of the Interior Ken Salazar and re-elected in 2010, is also a strong supporter of immigration and healthcare reform and voted in favor of the Patient Protection and Affordable Care Act signed by President Obama in 2010. In recognition of his strong leadership skills and abilities, Bennet’s peers awarded him Ted Kennedy’s seat on the Senate Committee on Health, Education, Labor, and Pensions.

Reflecting recently on the impact of dyslexia on his life and career, Bennet said, “I think it was positive at an early age to have had some level of adversity to work through, and I was very fortunate to have the support that I needed to make it through.”